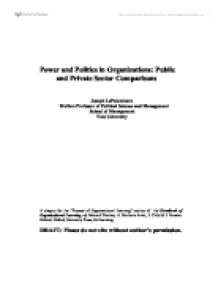 Power and Politics in Organizations: Public and Private Sector Comparisons

The search is broadened as well as intensified in order to identify aspects of the environment that might impinge on corporate success. The quality of intelligence relevant to business operations at home and abroad is improved, as is the knowledge about the location and means of access to points in the decision-making process that relate to public policies affecting the foreign investor. A keen sense that each environment has its unique aspects as well as dimensions that are general to any environment impels the firm to sharpen its analytical instruments and thereby try to improve its learning. Efforts to create a total quality system come to include not just the production, distribution, and servicing of a firm's products but also the firm's ability to recognize power and power struggles for what they are and to attune its learning methods to profit from this new capability. Types of Power Distributions and Equilibria Although power equilibria are never permanent, they tend to last for a long time. The reform of governmental bodies tends to be greatly resisted because, even when reforms are relatively mild, they threaten existing equilibria (Seidman 1977). As a rule, unless quick and deep change is the goal, it is better for an organization (inside or outside the public/political sphere) to learn how to operate within an existing equilibrium than to make efforts to change it. Indeed, it is almost axiomatic that, where a radical departure in public policy is intended, creating a new organization is far preferable to seeking achievement of these new goals through the existing system (Levin and Sanger 1994: 172-3). Events of this kind, though rare, provide highly fluid opportunities to achieve first-mover advantages as new networks and a new equilibrium are established. In this regard, it makes a difference whether the overall configuration of the political system is monocratic or pluralist, unitary or federal, highly centralized or characterized by broad delegation or devolution of powers. ...read more.

Other subfields, such as political parties and interest groups, should also be on this future research agenda. This is simply not enough systematic knowledge about the kinds of things these organizations learn, about whether or not such learning proceeds in a self-conscious way, and about the uses to which such knowledge is put. Illumination of any of these dimensions might also be fruitfully utilized by those nations (still growing in number) said to be in transition. They are not necessarily headed toward democracy or, for that matter, toward market economies as they are traditionally understood. If experts can teach these nations something about the economic marketplace and about how the organizations found in the marketplace learn and utilize knowledge, then why not recognize that this effort is both needed and possible in the political sphere as well. Attention to organizational learning will, I believe, also help improve the understanding not only of the emergence and spread in Western politics of the so-called Third Way, but also of the future implications of this momentous change. Adopted by many former left-wing political parties and more or less accepted by a number of key interest groups associated with them, this new departure promises to bring major transformations in the political systems of many countries. This phenomenon would not have spread as it has without a good deal of learning that is centered in organizations. It goes without saying that the particular configuration that the Third Way takes on in each country will be organizationally centered. It will also bring into existence dynamic interactions, some of them perhaps brand new, among the kinds of organizations that are found in the public/political as well as the private spheres. In order to look at these phenomena more systematically than in the past, we should use the concepts and theoretical questions that derive from work in the fields of organizational theory and organizational learning. They encourage more of the cross-fertilization and interdisciplinary knowledge that presumably represents a widely shared ambition. ...read more.