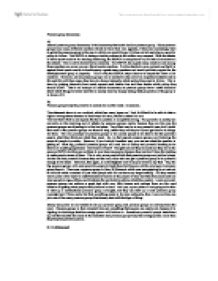 Pressure group democracy A) Internal pressure group democracy is the democracy that exists inside a pressure group. Since pressure groups have many different members which all have their own agendas, it becomes increasingly hard to guide the pressure group in the way in which you want it to go, if it does not all ready have a specific policy to follow. The RSPCA is facing a similar problem to this at this very moment. With the debate of blood sports such as fox hunting continuing, the RSPCA is conspicuous by it's lack of comment on the subject. This is not be choice but by necessity. The RSPCA has a great many members and among those members are some very pro Blood sports members. For the charity to come out and say that it is against blood sports would no doubt annoy a great many members and would put their support for the charity/pressure group in jeopardy. ...read more.