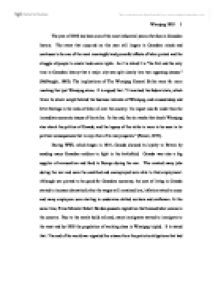 The year of 1919 has been one of the most influential years of strikes in Canadian history. The event that occurred on this year still lingers in Canadian minds and continues to be one of the most meaningful and powerful effects of labor protest and the struggle of people to create trade union rights. As it is stated it is "the first and the only time in Canadian history that a major city was split clearly into two opposing classes." (McNaught, 1963). The implications of The Winnipeg General Strike were far more reaching that just Winnipeg alone. It is argued that: "it involved the federal state, which threw its whole weight behind the business interests of Winnipeg, and aroused deep and bitter feelings in the ranks of labor all over the country. Its impact was far wider than the immediate economic issues of the strike. In the end, the six weeks that shook Winnipeg also shook the politics of Canada, and the legacy of the strike is more to be seen in its political consequences that in any other of its many aspects." (Penner, 1975). During WWI, which began in 1914, Canada showed its loyalty to Britain by sending many Canadian soldiers to fight in the battlefield. ...read more.

One author writes, "The street cars are not running, letters are not delivered, there is no delivery of bread or milk, city transportation of freight is held up, there is no fire protection except that furnished by volunteers. The highly complicated machinery of business has almost ceased to move." (Belawyder, 1967). Word spread across country to Edmonton, Regina, Vancouver, Saskatoon and other places around the country and even workers in other provinces started to strike in order to support Winnipeg strikers. The upper to middle class population in Winnipeg were in opposition to the strike. They would call the people protesting aliens, which were mostly immigrants and that the Bolsheviks have arrived in Winnipeg from Russia and were seeking to spread revolutionary ways. All throughout the strike the Western Labor News would have a strike bulletin that would report daily about the progress of the strike. As the newspaper reported on May 20th "the only thing the workers have to do to win this strike is to do nothing. Just eat, sleep, play, love, laugh, and look at the sun. There are those who are anxious for the workers to do something which would provide an excuse for putting the city under martial law." ...read more.