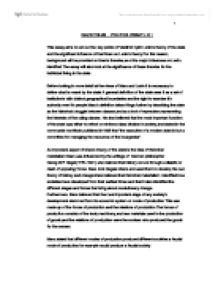 Set out the key points of Vladimir Ilyich Lenin's theory of the state and the significant influence of Karl Marx on Lenin's theory.

DAVID TOLAN POLITICS ESSAY L.O.1 This essay aims to set out the key points of Vladimir Ilyich Lenin's theory of the state and the significant influence of Karl Marx on Lenin's theory.For this reason, background will be provided on Marx's theories,and the major influences on Lenin identified.The essay will also look at the significance of these theories for the individual living in the state. . Before looking in more detail at the views of Marx and Lenin it is necessary to define what is meant by the state.A general definition of the state sees it as a set of institution's with distinct geographical boundaries and the right to exercise it's authority over it's people.Marx's definition takes things further by describing the state as the historical struggle between classes,and as a tool of repression,representing the interests of the ruling classes .He also believed that the most important function of the state was either to reflect or reinforce class division in society,and stated in the communist manifesto published in1848 that,"the executive of a modern state is but a committee for managing the resources of the bourgeoise". An important aspect of Marx's theory of the state is the idea of historical materialism.Marx was influenced by the writings of German philosopher Georg.W.F.Hegel(1770-1831) who claimed that history occurs through a dialetic,or clash of opposing forces. ...read more.

there was the existence of social classes and that the change from one stage to another was always a revolutionary one,i.e the rising working class would challenge the ruling class,and that they in turn would become the new ruling class, like the French revolution for example. Marx said that the revolution is followed by the "dictatorship of the proletariat",when the workers take over the state and all its instuments of coercion and use these instruments against the capitalist class.As the state is now being used by the workers against the capitalists its substance changes.It becomes the instrument of the many against the few,as the means of production become socialised ,classes disappear since there can be no classes without property.Without classes,there is no need for coercion.The dictatorship paves the way towards its own disappearance and to the establishment of a classless and stateless society.(Macridis&Hulliung,1996:107). Lenin,which was actually a pseudonym,his real surname was Ulyanov was a Russian Marxist theorist and also an active revolutionary.His contributions to Marxism were his theory of the revolutionary or vanguard party,outlined in What is to be done?(1902),his analysis of colonialism as an economic phenomena,described in Imperialism,the highest stage of capitalism(1916),and his firm commitment to the 'insurrectionary road to socialism' developed in State and Revolution in 1917.(Heywood:1997:75) Lenin faithfully accepted the body of Marx's work and devoted most of his life defending Marx's ideas.It is said that Lenin gave Marxist ideology and revolutionary tactics ...read more.

means neither more nor less than unlimited power,resting directly on force,not limited by anything,not restricted by any law or absolute rules.Nothing else but that. (Macridis&Hulliung:1996:111) .Following this sees the socialisation of the means of production and the abolition of private property,which in turn leads to the final slow "withering away of the state" as an instrument of coercion and oppression and the emergence of a stateless classless society. So in summation,although Marx and Lenin held similar beliefs,they both had differing ideas on how to achieve the same goal of a classless and stateless society.While Marx was content to wait for events to unfold and believed that society would eventually progress along the road to revolution at some point,Lenin held the belief that the proletariat had to be led along the road to revolution by a leader.Both of these theories benefit the individual in society in similar ways but from Marx's viewpoint the individual may have to put up with oppression from the capitalist classes for a long time before the build-up of a revolutionary force to oppose them. Whereas in Lenin's view a small but well organised group could take control at the earliest possible opportunity in the name of the masses.But both Marx and Lenin agreed that the outcome of revolution would benefit the individual as they both shared the same vision of a stateless classless society,with no need for any sort of state control. ...read more.