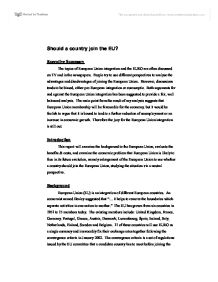 Should a country join the EU?

In addition, we should aware the fact that firms can take advantage of economies of scale when they start to trade in one large market. From a macroeconomic perspective, joining the EU may cause inflation to fall as member countries tries hard to meet the convergence criteria, therefore promote economic growth. Besides the economic analysis, the political agenda should not be ignored, as EU integration is the first leap to a single European state, i.e. a central bank, a common legislation, etc. The process of enlargement has continued over the past years and has dominated the talks at several summits. In Reeve's opinion "The economic effects of enlargement will undoubtedly be beneficial in the longer run. With careful analysis of economists from different countries, the enlargement policy which will be launched in 2004, is believed to have a better, stronger Europe, which can improve the EU's competitiveness in world trade with the World Trade Organisation (WTO) The costs of joining the EU Although there are a lot of potential benefits of EU integration, there are also costs which will arise in joining the EU. ...read more.

However, my research made me realize that the benefits of joining the EU seem to outweigh the costs from both an economic and political way of looking at the situation. Particularly with the fact that EU will become the world's largest economic community, after the enlargement policy is to be introduced in 2004. Therefore, I think that a country should join the EU as long as their economic structure is suitable. Evidence Besides evaluating my research, I have also found evidence to support my decision. Estonia for example, is one of the 13 candidate countries waiting to join the EU, as they believe it will boost the economy and increase inflow of foreign investments, along with Hungary, they expect a surplus of GDP from EU integration after joining the EU. Another country Sweden was first been offered the opportunity to join the EU in 1996, however, the people vetoed. Today, after seeing the success of EU, they decided to join, as this will lower unemployment and put the finances into good shape. University of California did a study on Sweden's economy and believes that EU will boost its trade with other EU countries as well as increase total output by 1/10 in the long run. ...read more.