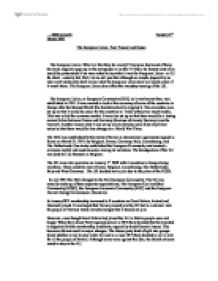 The European Union - Past, Present and Future.

....6#Homework Tuesday 6th March 2001 The European Union- Past, Present and Future The European Union. What is it that they do exactly? Everyone has heard of them, the name regularly pops up in the newspaper or on the TV but to be honest most of us would be pretty stuck if we were asked to say what it was the European Union- or EU for short - actually did. Well, let me tell you that although we maybe (especially us who aren't adults yet) don't realise what the European Union does we would notice if it wasn't there. The European Union does affect the everyday running of the UK. The European Union, or European Community (EEC) as it was known then, was established in 1957. It was created to look at the economy of some of the countries in Europe after the Second World War had dramatically crippled it. The committee was set up so that it would be easier for the countries to trade without too much trouble. This was called the common market. It was also set up so that there would be a lasting reconciliation between France and Germany (because obviously Germany was the 'enemy'.) Another reason why it was set up was to develop some kind of political union so that there would be less change on a World War Three. ...read more.

As the cabinet ministers of various countries change every time a new party comes into power there is a need for permanent ambassadors and representative, and these come from all the member countries. The European Council is when leaders of the member states meet at least twice a year. The meeting is of the heads of states and is therefor called the European council. These 'summits' as they are called were orders to happen on a regular basis and in 1987 the European council became an official part of the EU/C structure. The European parliament is made up of members who are elected by citizens of the member states. The parliament meets in Strasbourg (Austria), although the work in done is the EU headquarters in Brussels and the secretarial work done in Luxembourg. It is all over the place really! There are 567 seats available and the country with the highest population (Germany) gets the most seats and the country with the lowest population the smallest number of seats. The European Parliament works with the council of ministers to work out the EU budget and works with the Council of ministers about new proposals. The committees- there are two main ones, the economic and social committee. It has 189 members that are appointed in four-year slots. ...read more.

What about some rules about tourism? Perhaps some rules will be got rid of? If countries start to find it hard to keep to policies or complain and want the altered then maybe the EU will abolish them. So what do I think about the EU? At first I was like' yeah whatever' but now I see the good work they do to try and unite the countries of Europe and improve things for everyone I see it as a good thing. Some people may complain about the Euro but the Euro shouldn't be the only thing people think about when they think about the EU. Think about the work done for the environment, think about the aid given for countries with a high unemployment rates, think about the agricultural policies. It really is a great thing. Well, at least I think so. So to summarise the European Union (formerly the EEC and EC) is a union which has 15 countries that all try to work together to help trade, tourism, social and environmental issues. It is constantly coming up with new ideas and rulings that make the country members of the EU nice places to live. Europe without the EU would be a poorer place to live. On the next few pages is a map with the countries of the EU coloured in, the EU flag and the man who has been the president for the EU a man named Jacques Santer. ...read more.