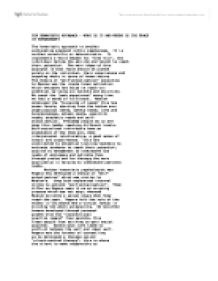 The humanistic approach - What is it and where is its place in Psychology?

THE HUMANISTIC APPROACH - WHAT IS IT AND WHERE IS ITS PLACE IN PSYCHOLOGY? The humanistic approach is another contrasting argument within psychology. It is neither scientific or deterministic. It represents a valid debate for 'free will', the individual having the ability and talent to reach their potential. The main ideas of this approach is that focus should be placed solely on the individual, their experiences and becoming whole in terms of human nature. The theory of 'self-actualisation' according to Maslow was the innate human motivation which everyone has helps us reach our potential by using our talents and abilities. ...read more.

Another humanistic psychologist was Rogers who developed a theory of 'self- actualisation' which was similar to Maslow's. they both emphasised internal drives to achieve 'self-actualisation'. They differ as Rogers sees it as an on-going process which doe not stop, whereas Maslow believes a person stops when they reach the peak. Rogers felt the role of the mother in childhood was a crucial factor in building the adult personality. He believed humans developed through personal growth with the 'unconditional positive regard' from parents, this frees people from striving to gain social approval. Conditional love leads to conflict between the self and ideal self. ...read more.

It also emphasises the responsibility of individuals and the belief that they have power for self healing. Counselling has become a huge industry due to the 'client-centred therapy'. Although it has good pints the weaknesses are that it ignores the mental processes which cannot be studied which are below conscious awareness. The theory cannot be proven right or wrong as it is vague and unscientific, therefore it is difficult to understand its concepts. Not everyone has potential to 'self- actualise' and clients may distort their explanations of experiences in therapy. The humanistic approach is valid as it is 'subjective' because it considers an individual own experiences. Each individual tries to maximise their potential and they should be responsible for their own lives i.e. 'free will'. MANDEEP .K. POONIA ...read more.