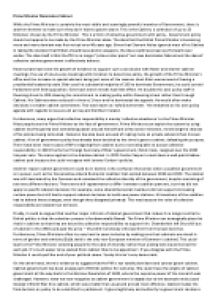 The Prime Minister dominates the Cabinet. How far do you agree with this view?

Transfer-Encoding: chunked ﻿Prime Minister Dominates Cabinet While the Prime Minister is certainly the most visible and seemingly powerful member of Government, there is another element to make sure they don't have to govern alone. This is the Cabinet, a collection of up to 23 Ministers chosen by the Prime Minister. This is a form of collective government with policy - Government policy should not appear to be made by the Prime Minister alone. The idea that the British Prime Minister is becoming more and more domiant was first voiced over 40 years ago. Given that Clement Attlee ignored most of his Cabinet in taking the decision that Britain should have atomic weapons, the idea could have been put forward even earlier. The idea itself is that the PM is no longer ?primus inter pares? but now dominates Cabinet and the idea of collective cabinet government is effectively defunct. Recent years have seen the growth of evidence to support such a conclusion with fewer and shorter cabinet meetings, the use of one-to-one meetings with ministers to determine policy, the growth of the Prime Minister?s office and the increase in special advisers being just some of the reasons cited. ...read more.

Furthermore, Prime Ministers often try very hard to seem inclusive by making sure their cabinets are mixed in terms of gender and ethnicity (Sajid Javid is the only non-European member of Cameron?s cabinet). This could lead to the Prime Minister selecting people for the sake of diversity rather than picking who would be best for each job. It?s much easier to be sacked from cabinet than to be appointed ? if you disagree with the Prime Minister it could spell the end of your political career. Surely this isn?t very democratic. On the other hand, there is evidence to suggest that the PM is not totally dominant and cannot ignore cabinet. Cabinet government has been a large part of British politics for centuries. We could trace the origins of cabinet government all the way back to the Glorious Revolution of 1688, where the supreme power of the monarch was challenged. However, what we now recognise as cabinet government is largely due to the example set by Lloyd George?s World War One cabinet, which was smaller than usual and proved more effective. Cabinet makes the final decision on policy to be submitted to parliament. ...read more.

they wish, but when Thatcher tried to do this with her cabinet in the 1980s it led to high profile resignations and contributed to her eventual downfall. The final point to consider when arguing that cabinet government remains central to the British political process is that the Prime Minister will want to minimise the risk of an embarrassing defeat. If his cabinet rallies against him it is likely the information would be leaked and the press would find out. Therefore it is in the Prime Minister?s best interest to make sure their ministers will genuinely support their policies. He will have assessed likely opposition and modified any aspects of the policy that are easily criticised. The cabinet prevents the Prime Minister from passing policies without considering the opinions of his colleagues. In conclusion, cabinet government certainly faces an unknown future. This is the first time Cameron has had a 100% conservative cabinet, and he has stated that he will not be the leader after the next election. This could mean that cabinet will begin to get rebellious around 2018 if Cameron is still in power. However, cabinet government has many benefits and there is no talk in the political sphere of abolishing it any time soon. ...read more.