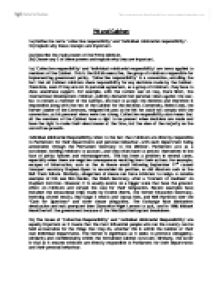 The relationship between the Prime Minister and Cabinet.

Clearly, through the previously outlines roles played by the Cabinet and indeed everyone on the government payroll, the big two notions are undoubtedly crucial. 2a) The office of Prime Minister only originated due to the inability of several foreign Kings to lead Cabinet meetings. Therefore, mainly for this reason, the role of the Prime Minister is not constitutionally defined. He is the first among equals (primus inter pares), but ultimately is elevated far above the rest. Briefly, the roles of the Prime Minister are heading the executive and consequently government policy, leading his party inside and outside of Parliament and being Britain's senior representative out of seas. In addition, he is also the countries head appointing officer. To fulfil his job, the Prime Minister has several powers which he can utilise: Firstly, he has the power of appointment, whereby he appoints all ministers and subsequently promotes, demotes, dismisses. This means that after an election he is able to appoint whoever he likes to fill all the government positions, and decide who does what in Cabinet. He appoints the chairmen of Cabinet committees, which is now increasingly important. This power means that he is able to take an unelected member of the House of Lords, and get them controlling several Government think tanks. ...read more.

Foreign minister after Home minister, and David Miliband who was promoted to the top of the Education department after only one spell as an MP. Margaret Thatcher on the other hand, was known for firing a lot of Ministers during her time as Prime Minister. As the Prime Minister can also appoint the chairmen of Cabinet committees, it means that he can appoint unelected Lords in the Cabinet or Ministries. This is important as some Lords have effective qualities but cannot fulfil some roles due to them not being in the House of Commons. Lord Falconer, who works as head of some Home Office committees is an unelected Lord, but Blair, who values his opinions and qualities using the power of patronage can put him in this position. Also, of added importance, is the appointment of Royal Commissions, Taskforces, Senior Civil Servants, Senior Judges, Archbishops, Governor of the Bank of England, as well as many other positions. However, the Archbishop of Cantebury, head of the Protestant Church, being chosen by a Catholic Prime Minister, asks some questions about whether this power is suited to the role. Overall, the Prime Ministers powers are of differing value, however the most important as patronage and the royal prerogative. These give him the greatest scope to make change, however in many situations question his role as a first among equals. ...read more.