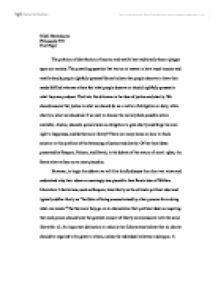 The problem of distribution of income and wealth has traditionally been a plague upon our society.

Nikhil Mavinkurve Philosophy 355 First Paper The problem of distribution of income and wealth has traditionally been a plague upon our society. The prevailing question that we are to answer is how much income and wealth should people rightfully possess? Some believe that people deserve to have their needs fulfilled whereas others feel what people deserve or should rightfully possess is what they can produce. Tied into this dilemma is the idea of justice and charity. We should assume that justice is what we should do as a matter of obligation or duty, while charity is what we should do if we cant to choose the morally best possible action available. And so, should a person have an obligation to give charity and forgo his own right to happiness, and furthermore liberty? There are many views on how to find a solution to this problem of the balancing of justice and charity. Of the three ideas presented by Hospers, Nielson, and Rawls, in the debate of the nature of moral rights, the Rawls view strikes me as most plausible. However, to begin this debate we will first briefly discuss the other two views and understand why their ideas are seemingly less plausible than Rawls idea of Welfare Liberalism. ...read more.

The prevailing idea of arranging certain equalities so that they help to benefit the least advantaged can be considered a useful system. While the distribution of wealth and income need not be equal, it must be to everyone's advantage. Unlike the views of Hospers and Nielson, this ideal allows the movement of persons up the social and economic ladder. The idea is that since everyone's well-being depends a upon a scheme of cooperation without which no one could have a satisfactory life, the division of advantages should be such as to draw forth the willing cooperation of everyone taking part in it, including those at a less advantage. Thus, this allows people to move up the economic ladder, while still maximizing the minimum benefits for all within this system. The two principles mentioned earlier, not only include that individual rights are preserved but that society as a whole is protected. By this I mean, the first principle is a protection of individuals and thus requires equality in the assignment of basic rights and duties, while the second, inequalities are justified if and only if they result in benefits for everyone in the society. It is interesting to note that our society basically evolved into a system such as this one. ...read more.

And therefore, by securing a minimum payoff, their seems to be a safety net in which person's can advance themselves without losing everything. In conclusion, a system of Welfare Liberalism is the best choice of the three views we have seen. The two views of Hospers and Nielson, in my view, fail to allow persons to move within the system. It seems that once you have found a certain niche, you are bound into that for an indefinite amount of time. However, a system of Welfare Liberalism allows not only for people to move up and down the social and economic barrier, but also helps by improving the injustice against those who are at a lesser advantage. Of course it is important to note that no system is perfect and thus Welfare Liberalism does have its faults; one being that it fails to understand that a "veil of ignorance" is impossible to place upon people who already have, in contemporary time, formed conceptions of what is right and wrong. i Hospers, John. The Libertarian Manifesto. Pg. 21. ii Nielson, Kai. Radical Egalitarianism. pg. 30. iii Rawls, John. A Social Contract Perspective. pg. 40. iv Inferred by John Rawls on pg. 41-43. v Rawls, John. A Social Contract Perspective. pg. 46 and pg. 51. vi Marin, Peter. Homelessness. pg. 69. ...read more.