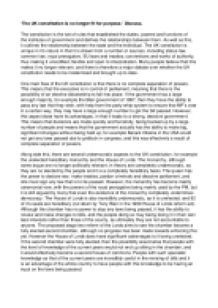 'The UK constitution is no longer fit for purpose.' Discuss.

﻿?The UK constitution is no longer fit for purpose.? Discuss. The constitution is the set of rules that established the duties, powers and functions of the institutes of government and defines the relationships between them. As well as this, it outlines the relationship between the state and the individual. The UK constitution is unique in it?s nature in that it is drawn from a number or sources, including statue law, common law, royal prerogative, EU laws and treaties, conventions and works of authority, thus making it uncodified, flexible and open to interpretation. Many people believe that this makes it no longer relevant, and there is therefore a major debate over whether the UK constitution needs to be modernised and brought up to date. One main flaw of the UK constitution is that there is no complete separation of powers. This means that the executive is in control of parliament, meaning that there is the possibility of an elective dictatorship to fall into place. ...read more.

The queen has the power to declare war, make treaties, pardon criminals and dissolve parliament, and she must sign any law that is to be passed. However, the monarchy has become mainly ceremonial now, with the powers of the royal prerogative being mainly used by the PM, but it is still argued by many that even the existence of the monarchy completely undermines democracy. The House of Lords is also incredibly undemocratic, as it is unelected, and 92 of it?s seats are hereditary (cut down by Tony Blair in the 1999 House of Lords reform act). Although the chamber has no power to stop any laws being passed, it has the ability to review and make changes to bills, and the people doing so may being doing it in their own best interests rather than those of the county, as ultimately they are not accountable to anyone. The proposed stage two reform of the Lords aims to see the chamber become a fully elected second chamber, although no progress has been made towards enforcing this yet. ...read more.

the ability to adapt and change as the country does, due to it?s organic nature and can therefore withstand changes in the country, and work with them rather than against them. Overall, although it can be argued that the constitution is no longer relevant and is outdated, it still holds major advantages, and due to it being organic has developed with the country to adapt to changing times. The constitution has never shown to be a major point of issue in the UK in that it has caused problems or prevented good things for the country happening, and although it may lack democracy in certain areas, there is no real need to completely revise and rewrite the constitution, as there is no significant issue with it currently. In addition to this, the fact that the UK has never had a fully codified, entrenched constitution, means that rewriting the constitution and significantly changing it would be leading the country into the unknown, and therefore it may not necessarily be better for our country just because it works for others. Charlotte McCracken 13NH ...read more.