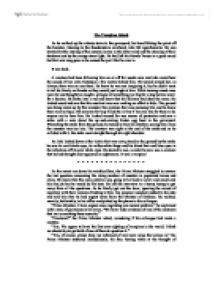 The Vampires Attack As he walked up the rickety stairs to the graveyard, his hand flaking the paint off the banister

The Vampires Attack As he walked up the rickety stairs to the graveyard, his hand flaking the paint off the banister, listening to the thunderstorm overhead, Jake felt apprehensive. He was startled by the rustling of the autumn leaves in the bitter wind and the dancing of their shadows cast by the orange street light. He had left his friends' house in a good mood but that was long gone as he sensed the peril that he was in. It was back. A creature had been following him on or off for weeks now and Jake could hear the sound of two extra footsteps a few metres behind him. He turned around but, as always, there was no one there. He knew he was not imagining it, but he didn't want to tell his family or friends as they would just laugh at him. While turning round once more he and thought he caught a glimpse of something, too big for a dog but too small for a human. He broke into a run and knew that his follower had done the same. He looked round and saw that his assailant was now making no effort to hide. The ground was being eaten up by this monster like creature that was pursuing him and he knew there was no hope. His screams for help filled the air but it was too late for there to be anyone out to hear him. ...read more.

"Please, come in," he exclaimed as he saw the Prime Minister sitting down the hall. The Prime Minister glanced nervously down at the blood leading him to the door where the Minister was standing. As he entered the room he shrank back at the disgusting sight that lay before him. There was a creature covered with blood, which he assumed to be a vampire, struggling against six or seven men trying to pin him to a bed. They eventually succeeded, pegging him down with three steel bars. The creature had a wound in its right shoulder that had stopped bleeding. The men who had pinned the vampire down now backed away to the edge of the room leaving the Prime Minister and the Minister of Defence to question the monster. "We will not hurt you if you answer our questions. We do not want to hurt you but may have to if you do not help us," The Minister explained. The vampire looked at both of the men standing over him and then answered. "You will never stop us, there are many more of us than you could ever believe," he explained in a hissing voice. "That is for you to believe," The Minister told him, "We need to find out if there is anything that we can use against them," he whispered so that the vampire could not hear him, "So I have acquired a crucifix, a cup of holy water, blessed by the priest who lives at the end of the road and some garlic. ...read more.

He started nudging the garlic further and further in so that they were more and more congested and eventually his plan started working. Some of the vampires were falling off the edge of the embankment and into the river. He kept nudging the garlic in and using the crucifix to ward them off when they got too close too him. There were fewer and fewer of them every minute and the army was making their number decrease even quicker until eventually there was just one left. Jake threw his crucifix at it and he slowly toppled over the side. They were now all in the water and the Priest was rushed out to bless it and make it holy. It seemed to hurt them greatly and sounds of wailing filled the air. He had done it! He had conquered the vampires almost by himself! Once they were all dead the army looked at him and one of the generals shouted out to him. "You shouldn't have done that kid but all the same we couldn't have finished them off without you." he told Jake, "Now you get home." * * * * * * * * * * * * * * * The newspapers spoke of a mysterious child who had killed most of the vampires. Jake's friends never believed that the child was him. He knew that one day the vampires would return. It was rumoured that there was one left behind in Manchester. He was ready for them. ...read more.