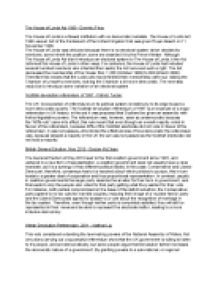 The ways in which Britain has become more democratic -elections, reforms and devolution

a ?nuclear family? party and the Liberal Democrats agreed to abstain to a vote about the recognition of marriage in the tax system. Therefore, even though neither party is completely satisfied, they will still be represented in their views and be able to represent the electorate better, leading to a more inclusive democracy. Welsh Devolution Referendum, 2011 - Nathan Liu This vote considered extending the law making powers of the National Assembly of Wales. Not only does carrying out a successful referendum show that the UK government is willing to listen to it?s people, and act democratically, but some people argue that Devolution further increases the democratic nature of a government. By granting powers to a sub-national, or regional level each person is allowed to have a bigger say in the running of their country. If a region or country has to report to a central government when law making, it will slow down the process of governing, and possibly reduce the impact which the people have. ...read more.

The crisis was then resolved in the 1911 election with the The Parliament Act which divided Bills into three classes. 1. Money bills, to which the Lords did not consent within one month, could be given royal assent without their approval. 2. On most other bills the House of Lords was given a suspensory veto. If the Commons passed the same measure in three successive Parliamentary sessions, covering at least two years, then it could become law without the agreement of the Lords. 3. The remaining class related to bills to extend the maximum term of the House of Commons beyond five years. The House of Lords retained equal legislative power for those Bills. These reforms gave more power to the people, for their representative party could now put forward a bill and if deemed important enough and was seen as a necessity for the benefit of the people, it could short cut its way through the House of Lords (?ruling class?) giving the people more democratic power as their choices could not always be knocked out by the house of lords who did not represent the majority. ...read more.