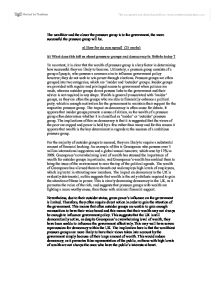 The wealthier and the closer the pressure group is to the government, the more successful they are.&quot; a) How far do you agree? (25 marks) b) What does this tell us about pressure groups and democracy in Britain today

The wealthier and the closer the pressure group is to the government, the more successful the pressure group will be. a) How far do you agree? (25 marks) b) What does this tell us about pressure groups and democracy in Britain today? To an extent, it is clear that the wealth of pressure group is a key factor in determining how successful they are likely to become. Ultimately, a pressure group consists of a group of people, who possess a common aim to influence government policy however; they do not seek to win power through elections. Pressure groups are often grouped into two categories, which are 'insider and 'outsider' groups. Insider groups are provided with regular and privileged access to government when policies are made, whereas outsider groups do not possess links to the government and their advice is not required in any shape. Wealth is generally associated with 'insider' groups, as they are often the groups who are able to financially enhance a political party, which is enough motivation for the government to maintain their support for the respective pressure group. The impact on democracy is often cause for debate. It appears that insider groups promote a sense of elitism, as the wealth of a pressure group often determines whether it is classified as 'insider' or 'outsider' pressure group. The implications of this on democracy is that it is suggested that the views of the poor are capped and power is held by a few ...read more.

Arguably, the UK's political system could be described as 'pluralist' which would dismiss the claim that wealth is vital for the success of a pressure group. Pluralism enables us to expect a wide range of groups, interests, beliefs and ideologies to be allowed to flourish. However, the belief that the wealth of pressure groups determines their success is not an attribute of pluralism and if this is the case, elitism appears more plausible than pluralism. An example, which strengthens this claim, is the banking lobby. Often producer groups represent their shareholders and management rather than their workers. It is clear, that when such elite members are insider groups, it can only be detrimental, as the likelihood of these insider groups forming a combination with the government is high. The implications for democracy in general are severe. The presence of pressure groups appears to simply empower the already powerful, rather than ordinary citizens. The result is an increase in political inequality, which appears to merely reward those possessing wealth, expertise and connections to those in government. To add, pressure groups impact on democracy in the UK appears to be extremely detrimental, as it is extremely evident that some groups possess more power than others. For example, the influence of Robert Murdoch's BskyB cannot be compared to a trade union or charity. The effect on democracy is that pressure groups fail to adequately equip the majority with a voice. ...read more.

The implication of wealth and pressure groups on democracy is that, whilst pressure groups claim to cater for all, they unfortunately appear to favour the wealthy. The elitist nature of this results in power becoming concentrated and dispersed amongst only a few. Ultimately, this sparks a sense of tyranny of the minority, as looking at the nation's economic state it is clear that those with wealth are in the minority. The problem with this is that, ordinary citizens appear to be ignored in favour of those with a considerable amount financial wealth. However, it is clear that without wealth it is possible to still influence the thinking of the current government the public sector's lack of wealth hasn't been detrimental to its success. This shows that wealth may be important but the cause is even more so. This does enhance democracy as often the poorer pressure groups require a considerable amount of public support. Therefore, often these pressure groups are well supported, which means the government are forced to listen to the view of the public. The nature of pressure groups appears to be becoming increasingly elitist, as it appears that wealth and power is becoming too valuable in the search to influence the government. For this reason, I would personally say that the movement of pressure groups is currently flawed, and they must become more accessible in order to be relevant to everyone, and not just those who can support the government financially or by other means. ...read more.