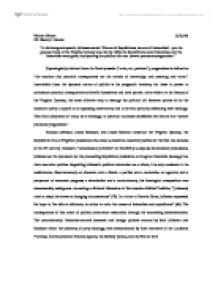 Warren Winter 2/23/04 US History I Honors "In his inaugural speech, Jefferson stated: 'We are all Republicans, we are all Federalists' - yet the greatest irony of the Virginia Dynasty was that by 1820, the Republicans were Federalists and the Federalists were gone, thus proving the political dictum: 'power promotes pragmatism.'" Etymologically derived from the Greek prassein ("to do, act, perform"), pragmatism is defined as "the doctrine that practical consequences are the criteria of knowledge and meaning and value." Inextricable from the dynamic nature of politics is the pragmatic tendency for those in power to orchestrate practical consequences to benefit themselves and their parties. As is evident in the history of the Virginia Dynasty, the most effective way to assuage the political rift between parties is for the dominant party to appeal to an opposing constituency and to its rival party by embracing their ideology. This fluid adaptation of value, as in ideology, to practical outcomes establishes the dictum that "power promotes pragmatism." Thomas Jefferson, James Madison, and James Monroe constitute the Virginia Dynasty, the Republican line of Virginian presidents who came to dominate American politics for the first two decades of the 19th century. Deemed a "consummate politician" for his ability to espouse his enemies' persuasions, Jefferson set the precedent for the proceeding Republican presidents to integrate Federalist ideology into their executive policies. ...read more.

In a 1792 letter to George Washington, Jefferson ventured that Hamilton's financial system "flowed from principles adverse to liberty, and was calculated to undermine and demolish the Republic." Jefferson's practical aims as a president, nevertheless, consistently derailed his own emotionally charged anti-Federalist invective, for the aforementioned accomplishments of his first term proved his only appreciable changes to the Hamiltonian system. "He believed in those [liberating] ideas... but he was not in the habit of breaking lances trying to fulfill them" (Hofstadter 33). Undermining his reputation for advancing local banks, a loose financial system, and individual states' payment of Revolutionary War debt, Jefferson chose to avoid intervening in the Federalist programs for funding national debt at par and federally assuming the state debts. As local banks chartered by Republican state legislatures aligned their financial support with Republican Party, "soon the Republican machines began flirting with the financial interests they had sworn to oppose" (Hofstadter 47). In defense of this burgeoning fiscal elite of Republicans, Jefferson declared to Secretary of the Treasury Albert Gallatin: "A merchant is naturally a Republican, and can be otherwise only from a vitiated state of things" (Hofstadter 47). Jefferson, furthermore, did not temper public land speculation or take steps in reforming the limitations on suffrage. ...read more.

In 1816, James Monroe took office with 183 electoral votes, the Federalist Rufus King losing with a scant thirty-four votes. In 1820, Monroe was reelected with 231 votes over John Quincy Adams - who entirely dropped the political appellative Federalist and ran as an Independent Republican -- holding merely one vote. Richard Hofstadter asserts, "When [Jefferson] entered the White House it was after satisfying the Federalists that he and they had come to some kind of understanding" (44). After winning the support of moderate Federalists by means of his pliant ideology, however, Jefferson had not merely brought about an understanding; he had set the precedent for their political eradication. Jefferson became a loose constructionist in order to rationalize the Louisiana Purchase and his unapproved military measures in the First Barbary War, and Madison had completely echoed the structure of Hamilton's financial system in his creation of the Second Bank of the United States. With their political identity thereby obviated, the Federalists were forced into assuming the stances of strict constructionism, as in their reaction to the Louisiana Purchase, and the compact theory of government, as in the Hartford Convention. As Josiah Quincy declared, the Republicans had "out-Federalized Federalism" (Hofstadter 54). The Virginia Dynasty's defeat of the Federalists not only proves that "power promotes pragmatism"; it reciprocally proves that pragmatism promotes power. ...read more.