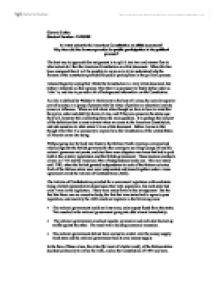 To what extent is the American Constitution an elitist document?Why then did the framers provide for public participation in the political process?

Gerard Cullen Student Number: 11425989 To what extent is the American Constitution an elitist document? Why then did the framers provide for public participation in the political process? The best way to approach this assignment is to split it into two and answer first to what extent do I feel the American Constitution an elitist document. When this has been answered then it will be possible to move on to try to understand why the framers of the constitution provided for public participation in the political process. I should begin by saying that I think the Constitution is a very elitist document, but before I elaborate on that opinion I feel that it is necessary to firstly define what an 'elite' is, and also to provide a bit of background information on the Constitution. An elite is defined by Webster's Dictionary as the best of a class; the socially superior part of society; or a group of persons who by virtue of position or education exercise power or influence. When we talk about elites though we have to bear in mind that they prize order and stability above all else, and if they can preserve the status quo they will, however this is diverting from the main question. It is perhaps the last part of the definition that is most relevant when we come to the American Constitution, and ask ourselves to what extent it is an elitist document. ...read more.

Again we can see just how elitist the Constitution is because it benefits big business even though the majority of the population were small freeholders and small merchants that benefited from a certain degree of protectionism. Economic elitism can also be seen in the parts of the constitution that give Congress powers over the regulation and value of money, bankruptcy laws, weights and measures, and so forth. These powers would enhance financial stability in the nation and this move could only benefit the more economically orientated members of the Constitutional Convention. There is also evidence of military elitism within the Constitution. Section 8 of Article 1 provides for the creation of an army and navy. Naturally a nation needs an army and navy, but this act has to be seen in the context of just what the American elites gained from it. The Constitution concentrated the military might of the USA under the Commander in Chief aka the President. The President also had the power, with the advice of the senate, to make treaties and to send and receive ambassadors. We have seen that the Founding Fathers wished to create a strong centralised government and this concentration of military and diplomatic might gave them the ability to do just that, with the added benefit of giving them the means to put down any revolution that might occur. ...read more.

And even this pales in comparison with the Electoral College. Essentially when the people vote in a presidential election they vote for delegates to the Electoral College who then choose the president from the candidates. What is wrong with this system is when you take into consideration that each state sends delegates to the Electoral College on a basis of population; and in each state the candidate with the most votes takes all the electoral votes (even if they win by only 1%); then those who did not vote for the candidate are effectively throwing their votes away. This system is further complicated by the fact that in the beginning the Electoral College was envisaged as a way for the elites to ensure that their preferred candidate got the job, and to enable them to 'correct' any misjudgements the public might have made on polling day. In conclusion therefore it can be seen that the American Constitution is a very elitist document, by virtue of the way in which it was conceived; the men who wrote it; the economic elitism imbedded in the document and of course the military elitism. Secondly the question as to why the framers of the Constitution provided for public participation is an easy one - they provided for public participation because they had diluted it so much, and built in so many checks and balances that they did not have to worry about threats to stability and order, which were after all the greatest concerns of elites. ...read more.