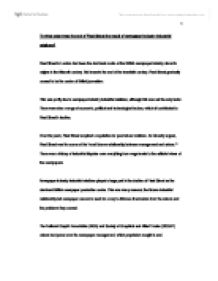 To what extent was the end of Fleet Street the result of newspaper industry industrial relations?

This new technology also meant that profits could be boosted as newspapers could be distributed to new areas, which were not practical to distribute to from their London printing centres; so more newspapers could be sold as the paper's circulation increased. Thus, technological advances contributed to the end of Fleet Street as the dominant newspaper centre as it weakened the need for Fleet Street to exist as a printing centre, and had economic advantages if printing centres were built around the country. Political factors also played a part in the end of Fleet Street as the dominant news centre. This is because the election of 1979 brought into power the Conservative Party, headed by Margaret Thatcher, who supported management over unions and, thus, provided the political context for newspaper owners to reform the newspaper industry and end the power of the printing unions. The Conservative government, through its introduction of the Employment Acts of 1980 and 1982, which restricted the power of unions, and its actions in industrial disputes in the early 1980s, highlighted that if the newspaper industry was reformed, to reduce the power of printing unions, the government would do little to support the unions. ...read more.