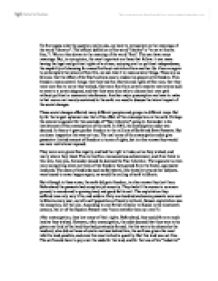 To what extent was the Tsar a Liberator?

To first assess what the question really asks, we have to extrapolate on the meanings of the word "liberator". The official definition of the word "liberate" is "to set at liberty: free; "i. We are then drawn to the meaning of the word "free". This can have many meanings. But, in my opinion, the most important are those that follow: it can mean having the legal and political rights of a citizen, enjoying civil or political independence, the capability of choosing for oneself without restriction from another. So if we are again to contemplate the nature of this title, we can take it to mean several things. These are as follows: that the effect of the Tsar's actions was to endow his people with freedom. This freedom means several things: that they had the liberties and rights of free men, that they were now free to act as they wished, they were free from certain massive restrictions such as want to a certain degrees, and that they were also able to choose their own path without political or economic interference. Another major presumption we have to make is that we are not merely contained to the serfs: we need to discuss the lateral impact of the social changes. ...read more.

This was assured by the Mir, which I shall deal with later. To compensate for this, one would expect that the freedom one would receive would be "beneficial" and worthwhile, when compared to how they previously lived. But often this was not the case. To explain this, we need to look at how the peasants lived at these times. The peasant population at this time was divided into two categories: the "Serfs" and the state peasants. The state peasants constituted around half of the population in the north, which then diminished towards the European landsiv. In theory both groups were both tied to the lands, but again in practice this was not the case. Although they were not free to travel and although they had not owned their own lands until 1937, they had long since acted as though they did. They were able to exercise a sizeable degree of freedom within their own area, as long as they paid their taxes and stayed within the confines of the local Russian legal system, which in the form of the local government officers, were often partial to a bribe. ...read more.

The Zemstvo were created to institute this on a national scale. These local councils created by Alexander II in order to be responsible for local affairs. The urban incarnations of the Zemstvo, the Dumas, followed quickly after. The Zemstvo allowed for many more freedoms - by initiating a series of successful reforms in the fields of education, health, hygiene, agronomy and local crafts, the local people had freedom of want to a certain extent. In conclusion, the freedom of the Russian populace to a certain extent was gained. But, maximum possibility of freedom was not achieved. While in theory, for many people, they did become freer through the emancipation edict, independent judiciary, the Zemstvo, and the liberal atmosphere, in other ways their freedom was restricted. The Mirs, the redemption payments and the lack of free political speech meant that for many people the only thing that had changed was the actual name of the people who ruled them. However, it is clear to see that the Tsar did initiate a series of huge reforms, which would serve to bring freedom to more and more people as time went on. Certainly, in his time, people did become more "free" and in my opinion were to a certain extent "liberated" by the Tsar. ...read more.