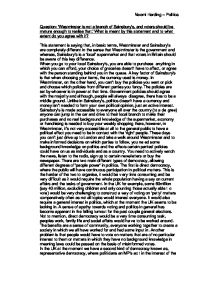 Westminster is not a branch of Sainsbury's, and voters should be mature enough to realise that.' What is meant by this statement and to what extent do you agree with it?

Question: 'Westminster is not a branch of Sainsbury's, and voters should be mature enough to realise that.' What is meant by this statement and to what extent do you agree with it? This statement is saying that, in basic terms, Westminster and Sainsbury's are completely different in the sense that Westminster is the government and whereas, Sainsbury's is a 'local' supermarket and that voters in Britain should be aware of this key difference. When you go to your local Sainsbury's, you are able to purchase anything in which you can afford, your choice of groceries doesn't have to affect, or agree with the person standing behind you in the queue. A key factor of Sainsbury's is that when choosing your items, the currency used is money. In Westminster, on the other hand, you can't buy the policies you want or pick and choose which policies from different parties you fancy. ...read more.

You need to actively watch the news, listen to the radio, sign up to certain newsletters or buy the newspaper. There are two main different types of democracy, allowing different degrees of 'people power' in politics. The first is direct democracy, where the public will have continuous participation in political matters. This is the harder of the two to organise, it would be very time consuming and be very difficult as it would require the whole population having a say on current affairs and the tasks of government. In the UK for example, some 60million (say 40 million, excluding children and only counting those actually able to vote) would be very challenging to construct a way of voting on 'petty' matters comparatively often as not all topics would interest everyone. It would also require a general interest in politics, which at the moment the UK seems to be lacking in. ...read more.

on, although, where referendums give us a sense of direct democracy and a feeling of being involved, it raises the question of how involved are we if it's the government's choice to call one initially? Having a representative democracy it distances the public from the world of politics and leaves important matters up to those who 'know what they are talking about' In representative democracy, we only have a certain impact on what goes on in our country and in a sense we (as a nation) have become almost like the shoppers in Sainsbury's, browsing through manifestos and party policies to see which would benefit us most when casting our votes, just as customers of Sainsbury's do when shopping for the best deals on food. In conclusion voters should be mature enough to realise that they can't choose and have everything they want politically as people will always disagree and it would just to be difficult to co-ordinate. Naomi Harding - Politics ...read more.