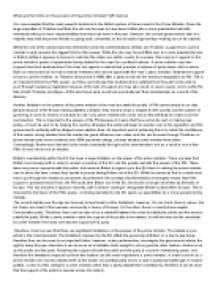 What are the limits on the powers of the prime minister?

﻿What are the limits on the powers of the prime minister? [25 marks] It is now accepted that the most powerful individual in the British system of Government is the Prime Minister. Since the large majorities of Thatcher and Blair the role can be seen to have been shifted into a more presidential role with individuals taking on more responsibilities than they had done in the past. However, the current government?s lack of a majority sees that the prime minister is going back, somewhat, to the old style of governing?making use of his cabinet. While the role of the cabinet seemed diminished under the administrations of Blair and Thatcher, support from a prime minister?s party remains the biggest limit on their power. While the role may have shifted over to a more presidential role, in British politics it appears to be key to maintain the status quo within a party for success; this may be in regards to the prime minister?s power of appointment being limited for the need for a political balance. ...read more.

This is important to the powers of the PM because it means that they cannot be rash in making new policy?it must be seen to be helping the country otherwise the public will begin to wonder over to the opposition and the government?s authority will be stripped come election time. An important part of achieving this is to retain the confidence of the media; during election time the media has great influence over voters and this can be seen through Thatcher?a prime minister who never achieved over 50% popularity ratings, yet was elected prime minister three times. Contrastingly, Brown was ridiculed by the media constantly throughout his administration and as a result is one of few PM?s to have never one an election. Britain?s membership within the EU has been a large limitation on the power of the prime minister. There are laws that Britain must comply with in order to remain a member of the EU and this greatly restricts the powers of the PM. These laws may prove unpopular with the public, but because Britain is signed up to the EU there is nothing the prime minister can do about the laws, unless they decide to pursue taking Britain out of the EU. ...read more.

Therefore, it can be seen that there are significant limitations on the powers of the prime minister. The debate is over which is the most important. The limitations imposed by the EU effect the governing of Britain on a day-to-day basis, therefore they can be seen to an important factor; however, under parliamentary sovereignty the government retains the right to leave Europe?therefore it can be seen as a limitation that?s weight is not as great as other factors?factors such as the public and the party. Retaining the support of both the public and the party is crucial in maintaining power, and therefore the limitations imposed by these two factions are the most important to a prime minister. In order to serve as a prime minister one must be elected both as the leader of a political party and to a seat in parliament (although in modern politics, a voter is often voting for a prime minister rather than a party despite their constituency; therefore it can be seen that the support of the public is needed across the nation). ...read more.