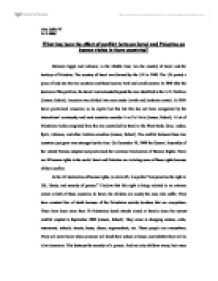 What has been the effect of conflict between Israel and Palestine on human rights in there countries?

Ana Lakic 9T 11.2.2004. What has been the effect of conflict between Israel and Palestine on human rights in there countries? Between Egypt and Lebanon, in the Middle East, lies the country of Israel and the territory of Palestine. The country of Israel was formed by the UN in 1948. The UN parted a piece of land into the two countries and these became Arab and Jewish sectors. In 1949 after the decision of the partition, the Israeli land extended beyond the area identified in the U.N. Partition (Jensen, Robert). Jerusalem was divided into areas under Jewish and Jordanian control. In 1950 Israel proclaimed Jerusalem as its capital but this but this has not been recognized by the international community and most countries consider it as Tel Aviv (Jensen, Robert). A lot of Palestinian Arabs emigrated from the area controlled by Israel to the West Bank, Gaza, Jordan, Syria, Lebanon, and other Arabian countries (Jensen, Robert). ...read more.

This is why the Israelis do not know what a suicide bomber looks like, because it could be anyone. Most suicide bombers have been in their 20s. The youngest was 16 years old (Jensen, Robert). On the other hand, Israel is destroying and disobeying human rights as well. Article # 13 of the UNDHR says "Everyone has the right to freedom of movement and residence within the borders of each state." Just a short while ago, last year, the Israelis built a separation barrier between Israel and the land of Palestine (US Dep. of State). The problem with this is that the Israelis have taken way more land to themselves than they are allowed to. They are still building this wall and it will probably be finished in about two year's time. It is said that they are building it because they think it will stop the Palestinian suicide bombers and other attacks against civilians. ...read more.

This is a property of Israel by law but almost no one pays attention to it as much as they should. The governments start not to care about whether they are violating human rights or not. But they start to care about how to make their citizens feel safe and the things they do become wrong towards the opposite society. As I said before, it is perfectly acceptable and everyone has a right to make their own community safe, but this does not mean that we have to violate the rights of others to be able to do so. I am not trying to be on anyone's side here, I am trying to unbiased and make the point that the conflict between these two countries has had a major effect on human rights and it has destroyed their relationship even more. I think that if they were to put religion and beliefs aside (which is most likely impossible!) and talk things through with each other, there would be peace. I guess the nation will have to wait a very long time for this to happen. Word count: 1,053 ...read more.