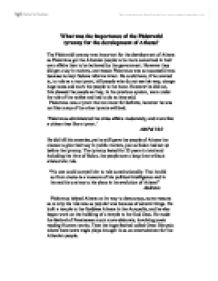 What was the importance of the Pisistratid tyranny for the development of Athens?

What was the importance of the Pisistratid tyranny for the development of Athens? The Pisistratid tyranny was important for the development of Athens as Pisistratus got the Athenian people to be more concerned in their own affairs then to be bothered by the government. However they did get a say in matters, one reason Pisistratus was so successful was because he kept Solons reforms intact. He could have, if he wanted to, to rule as a true tyrant, kill people who do not see his way, charge huge taxes and work the people to the bone. However he did not, this pleased the people as they, in the previous system, were under the rule of the nobles and had to do as they said. Pisistratus was a tyrant that we know for definite, however he was not like many of the other tyrants evil/bad. 'Pisistratus administered the cities affairs moderately, and more like a citizen then like a tyrant.' AthPol 16:2 He did kill his enemies, yet he still gave the people of Athens the chance to give their say in public matters, just as Solon had set up before the tyranny. ...read more.

Because of Pisistratus, and his encouragement of the crafts, this helped Athens become the number one in the pottery market, with having the best pottery and highest trade factor in Greece. This helped to make Athens not only a strong trading Polis but also world renowned for the fine quality of pottery. The tyranny was also good in two ways it united the state together, so everyone had a job, a duty. It also brought great peace and security to the people of Athens. Coinage was also introduced during the Pisistratid tyranny, this enabled them to trade with other Polis for goods such as certain materials etc. However we are unsure if it was Pisistratus himself of his sons Hippias or Hipparchus whom introduced this system of currency; however we do know it was during the reign of this family where they placed the head of an owl on the coins (sign of Athena) With the help of Pisistratus Athens soon fast became what is known as a Pan-Hellenic Centre (all Greek) ...read more.

This helps to let us know what roughly was done and the reactions of the people during the Pisistratid reign. He said to the people of Athens 'concentrate on their private lives and have neither the desire nor the leisure to take an interest in public affairs.' AthPol-16:3 He says all this to the people of Athens so as he can get on with his ruling the tyranny without any chance of an uproar, due to the people being more worried about their working the land then the city itself. As I said earlier what Solon and Pisistratus were doing without knowing it was leading Athens to a state of Democracy, below is a quotation from a leading Historian about the way Solon and Pisistratus went about Democracy. "Later Athenians looked back to Solon as the man who set them on the road to democracy, whereas Pisistratus & Hippias were an uncomfortable and not very reputable interlude. Nevertheless if we put aside moral judgements and considerations of intention or foresight, the historical role of the tyrants appears to have been equally important in moving the Athenians along that road" M.I. Finley ...read more.