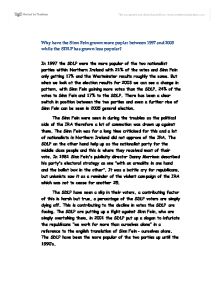 Why have the Sinn Fein grown more poplar between 1997 and 2003 while the SDLP has grown less popular?

Why have the Sinn Fein grown more poplar between 1997 and 2003 while the SDLP has grown less popular? In 1997 the SDLP were the more popular of the two nationalist parties within Northern Ireland with 21% of the votes and Sinn Fein only getting 17% and the Westminster results roughly the same. But when we look at the election results for 2003 we can see a change in pattern, with Sinn Fein gaining more votes than the SDLP, 24% of the votes to Sinn Fein and 17% to the SDLP. There has been a clear switch in position between the two parties and even a further rise of Sinn Fein can be seen in 2005 general election. The Sinn Fein were seen in during the troubles as the political side of the IRA therefore a lot of commotion was drawn up against them. The Sinn Fein was for a long time criticised for this and a lot of nationalists in Northern Ireland did not approve of the IRA. ...read more.

The SDLP were always seen as the more co-operational group of the two nationalist groups, whilst Sinn Fein always had something to say and always had to fight the SDLP were always more reasonable. This co-operation helped a lot of people in Northern Ireland and this could be a possibility of why they were so popular. But the Sinn Fein gave up the arms of the IRA and signed a peace treaty. This was a massive step in co-operation with the nationalists and unionist and seen as a bigger step the SDLP could ever take. The Good Friday agreement was an agreement between the British and Irish government. It was seen as a major step for Northern Ireland. It also boosted the Sinn Fein and helped them become the biggest nationalist part in Northern Ireland. The SDLP's rejection to violence during the trouble made them a very popular party, they played a large part in the talks in the 1990's which led to the Good Friday agreement. ...read more.

Their votes have declined rapidly over the last couple of years. The SDLP have been trying new techniques but are still finding it hard. They are seen as an old party and traditional, whereas Sinn Fein is more youthful and new. The SDLP's average voter is an OAP and the Sinn Fein's target is youth. Now that Sinn Fein is on top SDLP have to focus on getting more voters. During the troubles the SDLP were seen as a safer party, they had no violent connection and were a good option for Catholics. But now that the troubles are over, the voters feel that Sinn Fein can do something for them, that they will actually try and do something and not just stand around. Most of the major steps for Northern Ireland were caused or helped by Sinn Fein. The people of Northern Ireland see them as the best nationalist option because they will stand up and fight. Sinn Fein has grown more popular in 5 Years than they have in 80 years and they continue to grow. ...read more.