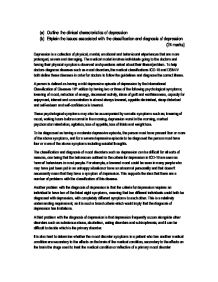 (a) Outline the clinical characteristics of depression (b) Explain the issues associated with the classification and diagnosis of depression (24 marks) Depression is a collection of physical, mental, emotional and behavioural experiences that are more prolonged, severe and damaging. The medical model involves individuals going to the doctors and having their physical symptoms observed and questions asked about their illness/problem. To help doctors diagnose diseases such as mood disorders, the medical classifications ICD-10 and DSM-IV both define these diseases in order for doctors to follow the guidelines and diagnose the correct illness. A person is defined as having a mild depressive episode of depression by the International Classification of Diseases 10th edition by having two or three of the following psychological symptoms; lowering of mood, reduction of energy, decreased activity, ideas of guilt and worthlessness, capacity for enjoyment, interest and concentration is almost always lowered, appetite diminished, sleep disturbed and self-esteem and self-confidence is lowered. These psychological symptoms may also be accompanied by somatic symptoms such as; lowering of mood, waking hours before normal in the morning, depression worst in the morning, marked psychomotor retardation, agitation, loss of appetite, loss of libido and weight loss. ...read more.

Therefore the diagnosis for moos disorders is made very difficult by factors such as this. A fourth concern with the classification and diagnosis of depression is that whilst depression is a universal disorder and the symptoms are similar around the world, there are some cultural differences. The biggest is between western and non-western cultures. People from non-western cultures often present with more bodily complaints than subjective distress. This could be misinterpreted if only western-based diagnostic tools are used. The difference between unipolar and bipolar disorder is highly relevant to the diagnosis of mood disorders such as depression as it often difficult for clinicians to differentiate between the various types of depression . A clear distinction has been made between unipolar and bipolar disorder, but there are still complications between the two. Coryell 1995, found that 10% of people diagnosed with unipolar disorder would then go on to develop bipolar episodes. As the treatments for both of these mood disorders are different, it causes more complications with the diagnosis and treatment of such disorders which is consequently a weakness in the diagnosis of depression. ...read more.

Overall the diagnosis of depression is very vague as the symptoms are too broad and there are obvious limitations to using a self reporting questionnaire. An extra issue is that there are endogenous, and non- endogenous depressions. One which is caused by biological factors, and the other by cultural factors, although Hammen 1995 says there is little evidence to support this. People diagnosed with endogenous depression are more likely to suffer from more severe symptoms and a greater likelihood of suicide. This seems to have implications for therapy, with endogenous depression responding more positively to ECT and to certain antidepressant drugs. A different issue with the diagnosis of depression is that depression occurs twice as frequently in women than it does in men. Men may be less likely to admit to symptoms of depression and are more likely to forget previous symptoms. This is a real issue when trying to diagnose an illness, as without a full understanding of the patient's symptoms the GP cannot make an accurate diagnosis. Above I have outlined the main issues associated with the classification and diagnosis of depression and have shown why it is so hard to differentiate between different disorders. ...read more.

A comprehensive review of some of the difficulties faced in diagnosing depression, and its possible source. Reference to some of the successful outcomes of diagnosis would be good to include.