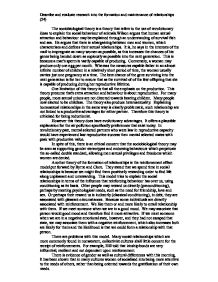 Describe and evaluate research into the formation and maintenance of relationships

Describe and evaluate research into the formation and maintenance of relationships (24) The sociobiological theory is a theory that refers to the use of revolutionary ideas to explain the social behaviour of animals.Wilson argues that human s****l attraction and behaviour may be explained through an understanding of survival fish and sea. He argues that there is a bargaining between men and women, which characterises and defines their s****l relationships. It is, he says in the interests of the mail to impregnate as many women as possible, as this increases the chances of his genes being handed down as copiously as possible into the next generation. This is because a man's sperm is vastly capable of producing. Conversely, a woman may produce only one egg per month. Whereas the measures capable father in an almost infinite number of children in a relatively short period of time, the woman usually carries just one pregnancy at a time. The best chance of the gene surviving into the next generation is for her to ensure that as the survival of of the few offspring that she is capable of producing during her reproductive lifetime. ...read more.

These are social exchange theory proposed by Thibaut and Kelly and the equity theory. Thibaut and Kelly were behaviourist and believed that relationships are based on social exchange. According to this theory we view our feelings for others in terms of profit and loss. The greater the reward and the lower the cost, the greater the profit will be hence the attraction of staying in the relationship. This theory sees relationships similar to a business deal where a minimax strategy is used which suggests minimum investment and maximum profit will get the best deal. However both partners cannot adopt this strategy solely and therefore compromise is needed. Homan's being a behaviourist believes that the law of effect is also applicable to relationships in terms that behaviours will be repeated if they reward us i.e. we are happy to stay in that relationship if it is rewarding. According to this theory there are two main factors that determine feelings in a relationship. These are our comparison levels and also our comparison levels for alternatives. Comparison level is concerned with the past and the present, that is, the comparison between the rewards and costs of the reference relationship and what we have been used to in the past. ...read more.

For example, Clark and Mills have identified two different styles of couples, the communal couple and the exchange couple. In the former, giving is motivated by concern and positive regard for the other wearers the other one is a kind of school keeping predicted by exchange theory. People in communal relationships to have some concerns over equity, but they are more relaxed over what it comprises. They tend to think that in the relationship, rewards and costs eventually balance out the equity is achieved. There is also a limited application of equity theory. The example, Hatfield showed that equity might be more important for females than for males and Murstein also assured that equity is an issue of concern only in problematic marriages. Another limitation is that it is culturally bias. Work carried out incited other than North America tend to give little support for equity theory. For example Mikula found no equity effects upon romantic relationships in Austria, while it was found that American students preferred equity, whereas European students preferred in quality. Moghaddam argue that the emphasis on exchange and equity is a reflection of the dominant values of North America, where these theories of social relationships were developed. They claimed that these theories reflect the highly individualistic, capitalist and Protestant work ethic of North America. ...read more.

The writer has answered the essay question and has provided some of the research available on the formation and maintenance of relationships. The introduction however, could be improved by explaining briefly about 'natural selection' and 'evolutionary theory'. At times the writer has missed words out or used an incorrect word which confuses the reader. Also referencing needs to always include both the authors and the date. However, most theories have been covered and good criticisms have been included . Better planning of the essay would improve the score.