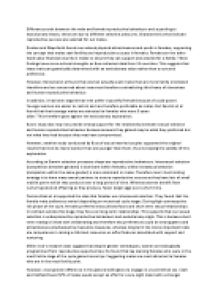 Transfer-Encoding: chunked ﻿Differences exist between the male and female reproductive behaviours and according to evolutionary theory, these are due to different selective pressures. Characteristics that indicate reproductive success are selected for our mates. Dunbar and Waynforth found men valued physical attractiveness and youth in females, supporting the concept that males seek fertility and reproductive success in females. Females on the other hand value financial security in males to ensure they can support and provide for a family. These findings have cross-cultural strengths as Buss collected data from 33 countries. This suggests that these traits are genetically determined with an evolutionary value rather than a nurtured preference. However, Bereczkel et al found that women actually want males that are more family orientated therefore are less concerned about resources therefore contradicting this theory of choosiness and human reproductive behaviour. ...read more.

Whereas women benefit from nurturing selected offspring as they produce, fewer larger eggs over a short time. Penton-Voak et al supported the idea that females use intersexual selection. They found that the female mate preference varied depending on menstrual cycle stages. During high contraceptive risk phase of the cycle, females preferred masculinised faces and short term sexual relationships. In contrast outside this stage, they focus on long-term relationships. This supports that our sexual selection is underpinned by reproductive behaviours and evolutionary origin. This is because short term mating is linked with childbearing and therefore key preferences could be strong genes and attractiveness emphasised by masculine measures, whereas long term the mores important traits are competence in raising a child and resources so softer features associated with support and nurturing. Miller et al?s research does suggest that despite gender stereotypes, women are biologically programmed from reproductive opportunities. ...read more.

Grilling and Buss suggested that females could also profit from short term mating such as a way to leave a poor relationship or producing more genetically diverse offspring. Therefore, short term mating suffers from gender bias, particularly saying that women cannot be sexually promiscuous and that it is a male characteristic, which is isn?t in modern society. Overall, these explanations can be criticised for being reductionistic as they cannot explain homosexual relationships and the drive for these relationships, as there are no reproductive advantages. Reproductive behaviours have changed dramatically over the last century with non-heterosexual relationships, widespread of contraception and choosing to not have children. This implies we have more free will over our behaviour than implied by the evolutionary approach. The approach also supports gender stereotyping with men being players which suffers from ethical implications. Therefore a more holistic approach which included psychological rationale might be more appropriate form explain homosexual relationships and provide a more balanced explanation rather than an approach that suggests we are a product of our genes. ...read more.