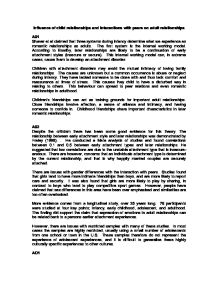 Influence of child relationships and interactions with peers on adult relationships A01 Shaver et al claimed that three systems during infancy determine what we experience as romantic relationships as adults. The first system is the internal working model. According to Bowlby, later relationships are likely to be a continuation of early attachment styles (insecure or secure). This internal working model can, in extreme cases, cause them to develop an attachment disorder. Children with attachment disorders may avoid the mutual intimacy of loving family relationships. The causes are unknown but a common occurrence is abuse or neglect during infancy. They have lacked someone to be close with and thus lack comfort and reassurance at times of stress. This causes they child to have a disturbed way in relating to others. This behaviour can spread to peer relations and even romantic relationships in adulthood. ...read more.

It was also found that girls are more likely to play by sharing, in contrast to boys who tend to play competitive sport games. However, people have claimed that s*x differences in this area have been over emphasised and similarities are too often overlooked. More evidence comes from a longitudinal study, over 25 years long. 78 participants were studied at four key points; infancy, early childhood, adolescent, and adulthood. The finding did support the claim that expression of emotions in adult relationships can be related back to a persons earlier attachment experiences. However, there are issues with restricted samples with many of these studies. In most cases the samples are highly restricted, usually using a small number of adolescents from one school or town in the U.S. These samples therefore do not represent the experience of adolescent experiences, and it is difficult to generalise these highly culturally specific experiences to other cultures. ...read more.

Although research suggests adolescent relationships can be healthy for later ones, there are possible negative effects. For example it was found that romantic involvement sometimes increased some forms of deviance, and other evidence to suggest that it was associated with decreased academic achievement. However, it should be noted that these effects were not found in late adolescent relationships suggesting the timing is also important. One last criticism of this theory is that it can suggest determinism: very early experiences have a fixed effect on later experiences, and so children are doomed to experience emotionally unsatisfactory relationships at one year of age. This has been proved wrong, many cases have been found when insecurely attached infants have experienced happy adult relationships. To conclude, the evidence is enough to say that early childhood, through to adolescent experiences do tend to have an effect of adult relationships, but are not necessarily determining. ...read more.

A reasonable attempt to debate some of the research and its findings. An introduction setting the context and place of Bowlby and other theorists in the field of attachment and later relationships would improve the mark on this essay, as well as developing the point when using psychological terms.
. 3*