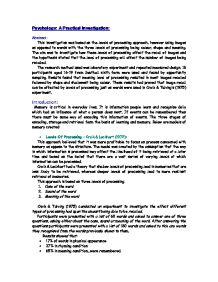 Psychology: A Practical Investigation: Abstract: This investigation was based on the levels of processing approach, however using images as opposed to words with the three levels of processing being colour, shape and meaning. The aim was to investigate how these levels of processing affect the recall of images and the hypothesis stated that the level of processing will affect the number of images being recalled. The research method used was laboratory experiment and repeated measured design. 18 participants aged 16-19 from Southall sixth form were used and found by opportunity sampling. Results found that meaning level of processing resulted in most images recalled followed by shape and shallowest being colour. These results had proved that image recall can be affected by levels of processing just as words were used in Craik & Tulving's (1975) experiment. Introduction: Memory is critical in everyday lives. It is information people learn and recognise daily which had an influence of what a person does next. If events can be remembered then there must be some way of encoding this information of events. The three stages of encoding, storage and retrieval form the basis of learning and memory. Below are models of memory created: * Levels Of Processing - Craik & Lockhart (1972): This approach believed that it was more profitable to focus on process concerned with memory as oppose to the structure. ...read more.

Design: The research method being used in this investigation is experiments because of the control that it offers and the type of inferences that can be made. A laboratory experiment will be used as this ensures there is a well-controlled environment as opposed to a field experiment which is carried out in more natural environments which may cause distractions resulting in a lack of reliability. The independent variable in this experiment will be the different levels of processing based on either the colour of the image being shallowest, the shape of the image being deeper, and about the meaning of the image being the deepest level of processing. The dependent variable will be the number of images being able to be recalled. The distance the participants are from the images will be kept the same as well as the time they are given to recall the images and time each image is shown on the slideshow. One extraneous variable may be that the images used may have personal relation with some participants leaving them more likely to be able to recall them rather than because of the level of processing. However this may be the case with any image used and so is difficult to control. ...read more.

Shape had the highest dispersion rate although all were low. These results support Craik & Lockhart's levels of processing theory as similar results were found with the difference being that this experiment focused on image recall as opposed to word recall. However although the sample of 18 does show the hypothesis to be correct, is not still not easy to generalise for the target population, however addition of more participants would be more time-consuming. The experiment may have been improved by the addition of more questions on each level of processing which would create more of a distinction between each level of processing results. Ethically the experiment was handled well as participants were willing and fully informed. This investigation can be looked into further with conducting this experiment onto a different age group. This allows comparisons be made between recall of images between a number of different age groups showing memory and age. This experiment can also be conducted with the influence of alcohol, drugs or amnesia which allows comparisons to how these influences affect the memory recall rate. Levels of processing theory is concerned mainly with factors affecting memory trace, the ability to remember events. Remembering not only depends on what is stored in the memory but also process of retrieving the event. This work and results found can be further researched into examining the retrieval process in relation to this. ...read more.