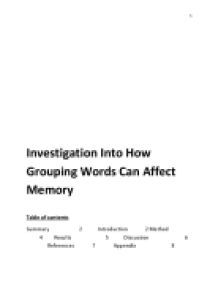 Investigation Into How Grouping Words Can Affect Memory

﻿Investigation Into How Grouping Words Can Affect Memory Table of contents Summary 2 Introduction 2 Method 4 Results 5 Discussion 6 References 7 Appendix 8 Summary The hypothesis states that the participants given the grouped words will remember more words in a recall test than those given the ungrouped words. This study aims to test this hypothesis by providing ten participants with the grouped word list and ten with the ungrouped word list and comparing the scores of the recall test. The results suggest that there is a difference between the ability to recall words between the two which supports this hypothesis. Introduction The aim of this study is to see how grouping words has an effect on memory. Memory can be defined as the processes that are used to acquire, store, retain and later retrieve information about events that have happened in the past. An individual?s memory for things that have happened in the immediate past or present is referred to as short-term memory (STM) and the memory for events that have happened in the more distant past is referred to as long-term memory (LTM). (Cardwell & Flanagan, 2003) STM is fairly limited in capacity and rapidly deteriorates unless it is preserved through rehearsal; memories do not last very long. LTM is relatively permanent storage with unlimited capacity. (Flanagan, 2000) There are three major processes involved in memory: encoding, storage and retrieval. ...read more.

The term chunking was devised by Miller in 1956. (c**n & Mitterer, 2009) His study, the magic number seven, showed that the capacity of the STM is around seven items, give or take two items. Miller showed that if we chunk together a string of twenty letters or numbers into seven meaningful items, we could remember them where we could not remember twenty items for immediate recall. My directional hypothesis is that the participants given the grouped words (list A) will remember more words in a recall test than those given the ungrouped words (list B) My null hypothesis is that any difference between the two groups will be down to chance Method I used a laboratory experiment for my research as it is most appropriate to the study of memory. A laboratory experiment is performed in a controlled environment where the researcher has direct control over the variables. The independent variable in my experiment is which list of words each participant received. There were two lists containing the same words. In list A, the words were grouped into categories while in list B the words were randomised. The dependant variable in my experiment is the number of words recalled by each participant through a simple memory test. For my experiment I compiled a list of twenty words which could be grouped into five categories. ...read more.

Median number of words recalled (max 20) Mode number of words recalled (max 20) Participants that received List A 18.9 19.5 20 Participants that received List B 16.5 16.6 16 The above table and graph show that there is a significant difference in the number of words recalled depending on which list of words the participant received. The findings support my directional hypothesis that the participants given the list of grouped words will score higher on a memory test than those given the ungrouped list of words. I will therefore reject my null hypothesis that any difference is down to chance. Discussion My research has shown that participants who were given the grouped list of words performed much better at recall than the participants given the ungrouped list of words. This has led me to accept my directional hypothesis. This experiment illustrates the use of rehearsal in STM as outlined in the multi-store model of memory and the working memory model theories that are defined in the introduction. My experiment could have been improved in several ways. A larger sample group would have given better results as it would be easier to generalise the findings to everyday situations. During my experiment, the participants performed the task in groups of between two and four, at different times on different days and in different places. These can be considered as confounding variables which could be combated by having a voluntary sample at an organised venue as this may enhance the experiment. The experiment would be easy to replicate as it is standardised. ...read more.