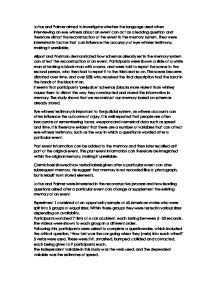 Loftus and Palmer aimed to investigate whether the language used when interviewing an eye witness about an event can act as a leading question and therefore distort the reconstruction of the event in the memory system. They were interested in factors that can influence the accuracy of eye witness testimony, making it unreliable. Allport and Postman demonstrated how schemas already set in the memory system can affect the reconstruction of an event. Participants were shown a slide of a white man attacking a black man with a razor, and were told to report the scene to the second person, who then had to report it to the third and so on. The scene became distorted over time, and over 50% who received the final description had the razor in the hands of the black man. It seems that participants 'prejudice' schemas (blacks more violent than whites) cause them to distort the way they constructed and stored the information in memory. ...read more.

Within these groups they were tested in various sizes depending on availability. Participants watched 7 films of a car accident, each lasting between 5-30 seconds. The videos were shown to each group in a different order. Following this, participants were asked to complete a questionnaire, which included the critical question, 'How fast was the car going when they (verb) into each other?' 5 verbs were used. These were; hit, smashed, bumped, collided and contacted, each being given to 9 participants each. The independent variable in this study was the verb used, and the dependent variable was the estimates of speed. For experiment 2, 150 participants were split into 3 groups of equal sizes, within which they were tested in various sizes, again depending on their availability. The groups were shown a film of a car accident, which lasted about 1 minute long with the accident scene lasting 4 seconds. They were then asked to complete a questionnaire which included a critical question related to the speed of the vehicle. ...read more.

They concluded that changing a single word can have an effect on the answer given. The verb 'smashed' implied a greater speed than the verb 'contacted' and therefore implied a more serious incident, changing the reconstructive memory in the participants memory. For experiment 2, Loftus and Palmer found that the average estimate of speed for the smashed condition was 10.46 compared to 8mp for the hit condition, highlighting a difference of 2.46mph and being found significant at p<0.05. The smashed condition resulted in significantly more 'yes' responses and higher estimates of speed, which was found significant at p<0.025. A week later, 32% of the smashed condition reported seeing broken glass, compared to 14% of the hit condition, showing an 18% difference. Loftus and Palmer concluded that the wording of a question can have a significant effect on the outcome of the participant. The verb 'smashed' acted as a leading question and affected the participants response to the broken glass question a week later, making the event seem more serious. Therefore a week later when asked, 'Did you see any broken glass?', participants were more likely to say yes. ...read more.

This is a good response to the question as the candidate has described to a great level of detail the study on the reliability of eyewitness testimony by Loftus & Palmer. Previously, they outline the first study by Loftus & ...

This is a good response to the question as the candidate has described to a great level of detail the study on the reliability of eyewitness testimony by Loftus & Palmer. Previously, they outline the first study by Loftus & Palmer and the study by Carmichael into the nature of memory and the role of schemas in reconstructing witnessed events, which acts as a great foundation for the description of Loftus & Palmer's study. It also shows the examiner there is a good level of knowledge behind this essay, bringing it above the potentially prescriptive formula suggested for questions like these and making it a thoroughly interesting read to see so much evidence written so clearly.

The Level of Analysis here is not assessed, as this is a "Describe" question likely to be worth around 8-10 marks in which candidates are instructed to describe a certain study. The candidate here can expect to receive full marks as the detail they write with in terms of the aim, sample, procedure, and results, all of which are accurate is simply outstanding. The candidate writes with clarity even when handling difficult numerical values. All in all this is a very nicely structured and very well-presented essay that conveys an excellent knowledge of Loftus & Palmer's study into the reliability of eyewitness testimony.

The Quality of Written Communication here is very good, even with all the complex numerical values which can often be hard to implement into length text and still form a flowing discourse. The candidate's use of psychological terminology is appropriate and accurate and there are no instance where errors in spelling, in punctuation or a misuse of grammar compromises the clarity of the essay.