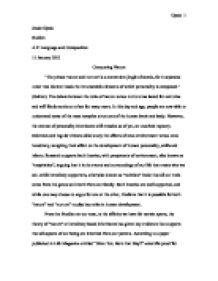 "The phrase 'nature and nurture' is a convenient jingle of words, for it separates under two distinct heads the innumerable elements of which personality is composed." (Galton). The debate between the roles of nature versus nurture has lasted for centuries and will likely continue to last for many more. In this day and age, people are now able to understand some of the most complex structures of the human brain and body. However, the contest of personality inheritance still remains as of yet, an unsolved mystery. Scientists and regular citizens alike study the affects of ones environment versus ones hereditary, weighing their affect on the development of human personality, skills and talents. Research supports both theories, with proponents of environment, also known as “empiricists”, arguing that it is the events and surroundings of our life that create who we are, while hereditary supporters, otherwise known as “nativists” insist that all our traits come from the genes we inherit from our family. Both theories are well supported, and while one may choose to argue for one or the other, I believe that it is possible for both “nature” and “nurture” to play key roles in human development.

From the freckles on our nose, to the affinity we have for certain sports, the theory of “nature” or hereditary based inheritance has given key evidence that supports that all aspects of our being are inherited from our parents. According to a paper published in Life Magazine entitled “Were You Born that Way?” scientific proof for hereditary inheritance is being discovered each day; in this case, the example of twin boys Jim Lewis and Jim Swinger. Separated at birth, both boys grew to identical height and weight, had similar personalities, traits, likes and dislikes, married women of the same name, and vacationed in the same spot (Colt). How would this be possible if environment alone determined personality? In this case, gene inheritance takes precedence. Additionally, IQ is often argued to be a trait derived from inheritance. Studies have shown that on a scale from 0 – 1, with 1 showing that all traits are inherited through genetics and 0 stating that absolutely nothing came from hereditary means, that IQ has a hereditary rate of about .7 – .8 (10.1007/BF01067188). Further studies also show that there is a rate of about .6 in verbal studies, .5 for spatial and speed-of-processing, and .4 for memory; all based on hereditary inheritance. However, empiricist studies have recently begun to gain more scientific groundings.