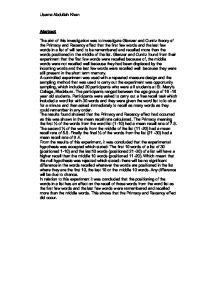 Abstract The aim of this investigation was to investigate Glanzer and Cunitz theory of the Primacy and Recency effect that the first few words and the last few words in a list of will tend to be remembered and recalled more than the words positioned in the middle of the list. Glanzer and Cunitz found from their experiment that the first few words were recalled because of, the middle words were not recalled well because they had been displaced by the incoming words and the last few words were recalled well because they were still present in the short term memory. A controlled experiment was used with a repeated measure design and the sampling method that was used to carry out the experiment was opportunity sampling, which included 20 participants who were all students at St. Mary's College, Blackburn. The participants ranged between the age group of 16-18 year old students. Participants were asked to carry out a free recall task which included a word list with 30 words and they were given the word list to look at for a minute and then asked immediately to recall as many words as they could remember in any order. The results found showed that the Primacy and Recency effect had occurred as this was shown in the mean recall rate calculated. The Primacy meaning the first ? of the words from the word list (1-10) had a mean recall rate of 7.9. The second ? of the words from the middle of the list (11-20) had a mean recall rate of 5.5. Finally the final ? of the words from the list (21-30) had a mean recall rate of 9.4. From the results of this experiment, it was concluded that the experimental hypothesis was accepted which stated: The first 10 words of a list of 30 (positioned 1-10) and the last10 words (positioned 21-30) ...read more.

This was crucial as if they participants were told what was going to be found and was exactly the experiment was about in detail then this would not produce results in a reliable way as they would not be a true reflection as the participants know what the experiment is about the will act in a way to please the researcher. Participants The target population for this experiment were all students of year 12 attending St. Mary's College in Blackburn at an age group between 16-18years old. The sample consisted of 20 participants and the sampling method used was opportunity sampling where first available participants were chosen from the college canteen. Opportunity sampling method was chosen due to the fact that this method of sampling is quick, convenient, less time consuming therefore the most economical method of sampling compared to other sampling method. Procedure Part of the target population, which was males and females students attending St. Mary's College, Blackburn between the age group of 16-18, where 20 participants were chosen to participate The participants were approached in the college canteen and asked if they would spare few minutes to take part in an AS psychology coursework if they agreed, they were politely taken into library in one of the quiet room individually. After being taken to the room the participant was given a brief statement, consent form to be read and signed and they were verbally informed what will happen in the experiment and that they have the right to leave the experiment if they wished. Participants were then given a standardised instruction sheet, which informed them on how to carry out the short experiment. After reading the standardised sheet the participant was given the list of words sheet which was facing down on the desk so that the participants do not look at the words and they were once again verbally asked to look at the words on the sheet for 1 minute and the duration of 1minute was timed using a stopwatch. ...read more.