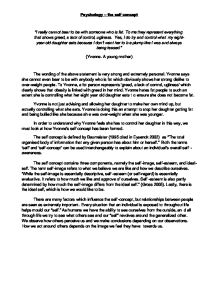 Psychology - The Self Concept

Psychology - the self concept "I really cannot bear to be with someone who is fat. To me they represent everything that shows greed, a lack of control, ugliness. Yes, I do try and control what my eight- year-old daughter eats because I don't want her to be plump like I was and always being teased." (Yvonne. A young mother) The wording of the above statement is very strong and extremely personal. Yvonne says she cannot even bear to be with anybody who is fat which obviously shows her strong dislike to over-weight people. To Yvonne, a fat person represents 'greed, a lack of control, ugliness' which clearly shows that obesity is linked with greed in her mind. Yvonne hates fat people to such an extent she is controlling what her eight year old daughter eats to ensure she does not become fat. Yvonne is not just advising and allowing her daughter to make her own mind up, but actually controlling what she eats. Yvonne is doing this an attempt to stop her daughter getting fat and being bullied like she because she was over-weight when she was younger. In order to understand why Yvonne feels she has to control her daughter in this way, we must look at how Yvonne's self concept has been formed. The self concept is defined by Baumeister (1995 cited in Eysenck 2002) as "The total organised body of information that any given person has about him or herself." Both the terms 'self' and 'self-concept' can be used interchangeably to explain about an individual's overall self-awareness. The self concept contains three components, namely the self-image, self-esteem, and ideal-self. The term self-image refers to what we believe we are like and how we describe ourselves. "While the self-image is essentially descriptive, self-esteem (or self-regard) is essentially evaluative. It refers to how much we like and approve of ourselves. Self-esteem is also partly determined by how much the self-image differs from the ideal self." ...read more.

According to Goffman, the world is a stage in which we are all social actors. We play multiple roles doing set things based on expectations of each other. In certain situations we all have ideas of how to act based upon what the other person expects so they are able to interpret our actions and apply meanings to them. For example, in a classroom the teacher will adopt a professional manner in front of students and supply them with information using symbols and language he/she expects the students will understand. The students will normally adopt an attentative manner and use symbols to let the teacher know they want to ask a question such as putting up their hand and wait to be acknowledged. Basically, we are all aware that there are standard rules depending on the type of interaction, for example if attending a funeral the 'norm' would be to wear black formal attire and act respectfully; we would not wear something outrageous or act loudly and offensively. Goffman suggested that we play the role that fits best to the social situation we are in. He also believed we use front and backstage situations to determine how we play our role and manage these by our ability to respond. The way we manage our stage is by the use of props. For example, if we were attending an interview we would dress 'business' like and may even carry certain items such as a brief case or a folder. This would then manage the way we act and also the responses we would receive which would normally be 'polite and formal' than if we attended in a tracksuit carrying a rucksack. We learn meaning through interaction, which then enables us to interpret the meaning through symbols such as bodily expressions, uniforms of dress and language. Goffman stressed that interpretations of meanings are not fixed but are modified accordingly to the social situation. ...read more.

We present ourselves to others through everyday interactions, through the way we dress and speak, making ourselves the same as those with whom we share an identity and different from those whom we do not. Both as individuals and through collective action it is possible to redefine and reconstruct our identities. We can alter and interpret the roles we adopt. Through collective action, such as feminism, it is possible to influence the social structures which constrain us, however there are limits. The scripts of our everyday interactions are already written and at the wider level structures are deeply embedded in contemporary culture, economy and society. There have been changes in our lives, in the domestic arena, in the work place, in our communities and at the level of the nation and its place in society. Change has also created diversity which has brought new opportunities for redefining ourselves, at home and in the work place, and as members of different ethnicities and nations within Britain. In conclusion, it can be seen our identities are no longer fixed, but are now more fluid and open to change. There are lots more socialisation agencies for children apart from there just being social support from the family and face to face interaction as there was years ago. Reference Page Eysenck, M. 2002. Simple Psychology. 2nd ed. East Sussex: Psychology Press Ltd. Giddens, A., 2006. Sociology. 5th ed. Cambridge: Polity Press. Gross, R. 2005. Psychology: The science of the mind. 5th ed. Oxon: Hodder Headline plc. Haralambos, M & Holborn, M. 2000. Sociology: Themes and Perspectives. 5th ed. London: HarperCollins Publishers Limited. Hogg, M. & Vaughan, G. 2005. Social Psychology. 4th ed. Essex: Pearson Education Ltd. Leary, M et al. 2002. Handbook of self and identity. New York: Guildford Press Bailey, T. 2002. Reclaiming children & youth- Teasing and harassment. (Online) Accessed at: http://www.cyc-net.org/Journals/rcy-biblio.html [January 2008] Landau, S. et al. 2001. You really don't know how much it hurts: Children's and pre-service teachers' reactions to childhood teasing. (Online) Accessed at: http://www.cyc-net.org/Journals/rcy-biblio.html [January 2008] ...read more.