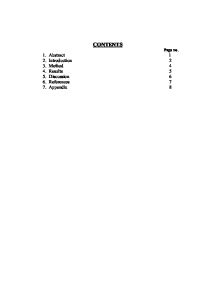 The aim of this experiment was to test the idea that effort and not levels of processing determine memory trace. Specifically to partially replicate the study by Tyler (1979) in which there were two groups each given a list of anagrams of the same words.

CONTENTS Page no. 1. Abstract 1 2. Introduction 2 3. Method 4 4. Results 5 5. Discussion 6 6. References 7 7. Appendix 8 Abstract The aim of this experiment was to test the idea that effort and not levels of processing determine memory trace. Specifically to partially replicate the study by Tyler (1979) in which there were two groups each given a list of anagrams of the same words. However one list is harder to solve than the other, an unexpected recall test is then given. He found that the group with the harder anagrams recalled more when given a recall test than the group given the easy anagrams. So ten participants were selected, five were given a list of easy anagrams to solve and the other five were given the hard list of anagrams to solve. They were then given an unexpected recall test. The percentage of words recalled from the correctly solved anagrams was recorded. A Mann-Whitney U test was carried out which gave a result of U= 9 at a level of significance p< 0.05 but this value obtained was grater than the critical value U=4 so the result is non significant. The directional hypothesis that the participants solving the harder anagrams will show a significant difference in recall compared to those solving the easy anagrams is rejected and null hypothesis accepted. ...read more.

One group is given a hard set of anagrams to solve whilst the other group (control group) is given an easy set of anagrams to solve. The Independent variable is the amount of effort used to solve the anagrams and the Dependent variable is the percentage of words recalled from the anagrams solved. A pilot study was carried out and it was found that the words 'strawberry' and 'raspberry' were too hard to solve and so were eliminated from the anagrams list. The controlled variables are that the participants were the same age group so that the participants did not feel uneasy about being the oldest or youngest which could have affected their performance, were told to sit individually to avoid copying or any discussion about the task, the time was set at two minutes to solve the anagrams and two minutes to recall them and both the groups were given the same words as anagrams. Participants: It is an opportunity sample, 10 participants were found, 5 boys and 5 girls to avoid gender bias and they were also of mixed ethnicity to avoid any racial discrimination which were other control measures. The participants were not told what they were going to do in the experiment. ...read more.

Experimenter bias could have occurred as the experimenters were in the same room as the participants so could have had an effect on their performance. Some theoretical problems could be that the same anagrams as Tyler used in his experiment were not used so the results are not the same. The theory suggests that the more effort put in to solve the anagrams leads to better recall but 'can the amount of effort be measured?' Everyone does not use the same effort for a given task there are bound to be individual differences. Also time is another variable, as people tend to take longer on difficult tasks so is it that they spend more time so the task becomes easy? Or is it that more effort is used in that time? From this it can be seen that the amount of effort and length of time spent to solve the anagrams are confounding variables. The experiment lacks ecological validity as the results cannot be generalised to real life. If further research was to be done taking different age groups into consideration may show different results as their vocabulary maybe more developed so easier for them to solve anagrams. People from different backgrounds i.e. socio-economic status could show a different result as those from a higher socio-economic status may have better education and knowledge than someone from a lower social-economic status. ...read more.