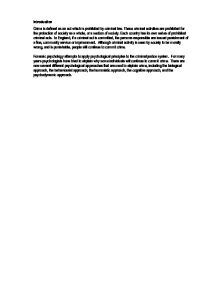 Introduction Crime is defined as an act which is prohibited by criminal law. These criminal activities are prohibited for the protection of society as a whole, or a section of society. Each country has its own series of prohibited criminal acts. In England, if a criminal act is committed, the persons responsible are issued punishment of a fine, community service or imprisonment. Although criminal activity is seen by society to be morally wrong, and is punishable, people still continue to commit crime. Forensic psychology attempts to apply psychological principles to the criminal justice system. For many years psychologists have tried to explain why some individuals will continue to commit crime. There are now several different psychological approaches that are used to explain crime, including the biological approach, the behaviourist approach, the humanistic approach, the cognitive approach, and the psychodynamic approach. Biological Approach The biological approach focuses on how our brain structure, physiology and our chromosomal and genetic make up can affect our behaviour. It would suggest that our physiological components predispose us towards a certain type of behaviour. Lombroso's Theory In the late eighteenth century a number of studies were carried out by phrenologists, who studied the shape and structure of the human head. They believed that there was a link between the shape of the skull and the structure of the brain that it contained; suggesting certain abnormalities in the cranium could be related to criminal behaviours. Cesare Lombroso (1835-1909) was a physician and criminal anthropologist. He measured the facial features of prisoners in Italian jails and identified physical characteristics, that he believed indicated criminality. Individuals that had these features were considered to be a more primitive type of human being. Among the features which Lombroso identified were the following: an over-sized brain; squinting eyes; prominent eye-brows and a projecting jaw. Lombroso believed that these primitive humans could not adjust socially or morally to civilised society, could not distinguish right from wrong, had no remorse or guilt and therefore could not form meaningful relationships. ...read more.

Positively, Sutherland's theory acknowledged that it was not just psychopaths that became involved in crime, but anyone who was placed amongst a crime favourable society. Sutherland also identified crimes committed daily in middle class society e.g. incorrectly filling out of tax return forms. On the negative side this theory struggles to explain crimes of passion and impulse. It also fails to explain offences by people who have not been raised to have deviant values. This theory is an untestable theory. You cannot measure the extent of influence from one person to another. Also, it suggests nothing about individual differences and susceptibility to the influence of other people, however, there is no evidence to suggest it is inaccurate, and it has been used as the basis of other theories such as the differential association reinforcement theory of Akers (1979). Evaluation of the Behaviourist Approach Firstly, Pavlov's theory lends itself well to explaining how people develop behavioural problems. It is however, argued the same principle cannot be applied to humans, which suggests the distress the animal goes through is not justifiable and doesn't comply ethically. Watson and Rayners theory does not explain how people develop a fear, without having a traumatic incident associated with it. There are also ethical concerns with Watson and Rayner's experiment as no unconditioning took place. Bandura's theory was focused on observational learning of aggressive behaviour, and not generalised to criminality. It has been used to advance Sutherland's which highlighted problems in society. Sutherland's theory acknowledged anyone in a favourable society could become involved in crime, not just psychopaths. Positively, learning theories emphasises the importance of environmental factors. They demonstrate influence of reinforcement and observation on behaviour and explain why criminality runs in families. The difference in crime rates between males and females is also explained, as they socialise in different groups. On the negative side this theory struggles to explain crimes of passion and impulse. ...read more.

On a positive side, the cognitive approach can be applied to almost all areas of psychology. Cognitive theories of crime cannot explain all types of criminal activity such as impulsive crimes, and can therefore only offer an explanation to pre-meditated crime, but I think that they do explain moral reasoning and how crime is actually approached; therefore they can be used in combination with other theories to explain criminal behaviour. My most favourable approach to explaining crime is the psychodynamic approach. It is a shame that information stored in the unconscious is untestable. These theories do tend to consider behaviour after the event and to work back from there to its causes. They have little value in predicting behaviour or identifying potential offenders. The psychodynamic approach is the only theory that addresses emotional factors in terms of crime, and is also more probable, as most crimes are inconceivable. In conclusion to what explains crime, some criminal attributes are learnt through social learning but I do not regard this approach to explain majority of criminal activity. I also do not regard the humanistic approach to lend itself to explaining criminal behaviour. The cognitive approach can certainly explain the way in which crime is approached, although not the actual reasons that trigger people to commit crime. I think that there is a lot of evidence to support the biological approach of criminality, though I can only assume that criminality results from genetic predispositions that interact with specific environmental situations. The psychodynamic approach is an excellent approach to explain criminality. It is a shame that it is an untestable theory. It is a better approach for explaining behaviour rather than predicting it. I believe that there needs to be a genetic predisposition towards crime and that if such a predisposition exists then the types of crime we commit can be related to unconscious processes that occur, caused by our early experiences. The cognitive approach can then explain the way in which the crime was approached. ?? ?? ?? ?? ...read more.