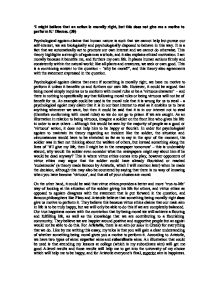 I might believe that an action is morally right, but this does not give me a motive to perform it. Discuss. (30)

'I might believe that an action is morally right, but this does not give me a motive to perform it.' Discuss. (30) Psychological egoism claims that human nature is such that we cannot help but pursue our self-interest, we are biologically and psychologically disposed to behave in this way. It is a fact that we automatically act to promote our own interest and we cannot do otherwise. This theory highlights a strength of egoism as a whole, and it also explains ethical motivation. I act morally because it benefits me, and furthers my own life. It places human actions firmly and consistently within the natural world: like all plants and creatures, we seek or own good. This is a convincing answer to the question - 'why be moral?', and this theory also agreements with the statement expressed in the question. Psychological egoism claims that even if something is morally right, we have no motive to perform it unless it benefits us and furthers our own life. However, it could be argued that being moral simply requires us to conform with moral rules or be a 'virtuous character' - and there is nothing to specifically say that following moral rules or being virtuous will not be of benefit for us. An example could be used is the moral rule that it is wrong for us to steal - a psychological egoist may ...read more.

They believe this because virtue ethics claims that our main aim in life is to be truly happy, but we will only be able to do this if we are completely balanced. Our true happiness comes with the conviction that by being moral we will achieve a flouring and fulfilling life, as well as the knowledge that we are contributing to a flourishing community. They believe we are happier around positive and supportive people but an egoist would not be able to do this. For Aristotle, there is an aim (or telos in Greek) for everything that we do. Like by me writing this essay, my telos is that you will gain a clear understanding of whether something being moral gives you a motive to perform it. According to Aristotle, we have two types of aims: superior aims and subordinate aims. An illustration that could be used is that attending my lessons at college (which is my subordinate aim) will get me good A-level results and those results will help me to get into the university of my choice which will help me to be happy, and for Aristotle everyone's final, superior aim is happiness. However the word we should use for happiness in Aristotle's theory is eudaimonia, which could be described as 'living well' or 'flourishing', not just for yourself but for society. ...read more.