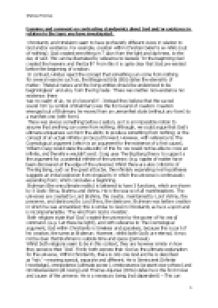 Christianity and Hinduism seem to have profoundly different views in relation to God and/or existence.

﻿Melissa Thomas Examine and comment on contrasting standpoints about God and/or existence in relation to the topic you have investigated. Christianity and Hinduism seem to have profoundly different views in relation to God and/or existence. For example, creation within Christian belief is ex-nihilo (out of nothing). God created everything in 7 days from the light and darkness, to the day of rest. This can be illustrated by reference to Genesis ?In the beginning God created the heavens and the Earth? From this it is quite clear that God pre-existed before the beginning of creation. In contrast, Hindus reject the concept that something can come from nothing for several reasons such as, the Bhagavad Gita (BG) states the eternality of matter: "Material nature and the living entities should be understood to be beginningless? and also, from the Rig Veda: ?There was neither non-existence nor existence: there was no realm of air, no sky beyond it? - Instead they believe that the sacred sound ?Om? (a symbol of Brahman) was the first sound of creation. Creation emerged out of Brahman; he moved from an unmanifest state (without any form) ...read more.

himself to God: ?Though he slay me, yet will I trust in him: but I will maintain mine own ways before him? - his faith is not broken and he is later rewarded for his devotion with a new family and a new life; this is similar to Jnana Yoga in Hinduism beliefs. The faith performed in the practice is the key because ultimately the intellect is abandoned; utter dedication to a true understanding of one self will result in liberation (Moksha). Thus showing that both religions similarly have a challenging faith to undertake, even with relation to evil and suffering in the world; although Christianity is more based on trust and understanding; they follow rules (the 10 commandments) to show God their dedication and faith; whereas in Hinduism, you are trying to gain the trust and understanding for yourselves. (E.g. in yoga, the realisation after all desires of Samsara are ridden, that you are one, everything is one) A loving relationship with God is promised in both religions: if they understand and abide by God?s rules and gift of life (Christianity) or if they dedicate and commit their love profusely/ realize their true essence as Brahman. ...read more.

to reincarnations within their beliefs; the true goal is to produce a loving relationship that is brought up with God in salvation after death. Whilst it is an obvious notion to assume that nothing occurs after death, some, myself included could argue that this is just giving up on the matter. Both Hinduism and Christianity reject materialism as a substantial way of reaching salvation, as they are only temporary desires with minimal fulfilment. Jesus said: ?Easier for a camel to go through the eye of a needle, than for a rich man to enter the kingdom of heaven?. Hindus show their ignorance to material possessions through yoga and deep dedication to God. In conclusion I believe that whilst both relgions show various similarities and differences in relation to god and/or existence; for example they both believe in a divine being who is all loving and all powerful and a existence after death. In relation to creation myths however Christians that it was ex-nihilo, whereas Hinduism declares an emergance out of Brahman. From this it is clear that whatever God is he is perhaps so unique that neither Christianity, Hinduism nor anyone else for that matter can ever give any rational explanation of him. ...read more.