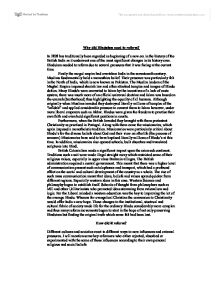 Why did Hinduism need to reform?

Why did Hinduism need to reform? In 1828 has traditionally been regarded as beginning of a new era in the history of the British India as it underwent one of the most significant changes in its history ever. Hinduism needed to reform due to several pressures that it was facing at the current time. Firstly the mogul empire had overtaken India in the seventeenth century. Muslims fundamentally hold a monesthics belief. Their presence was particularly felt in the North of India, which is now known as Pakistan. The Muslim leaders of the Mughal Empire imposed shariah law and often attacked temples and images of Hindu deities. Many Hindu's were converted to Islam by the incentives of a lack of caste system, there was much more of an official universal doctrine and Islam was based on the ummah (brotherhood) thus highlighting the equality of all humans. Although originally when Muslims invaded they destroyed literally millions of temples of the "infidels" and applied considerable pressure to convert them to Islam however, under more liberal emperors such as Akbar. Hindus were given the freedom to practise their own faith and even held significant positions in courts. Furthermore, when the British Invaded they brought with them protestant Christianity as practised in Portugal. ...read more.

Profoundly influenced by European liberalism, Ram Mohan came to the conclusion that radical reform was necessary in the religion of Hinduism and in the social practices of the Hindus. He founded the Brahmo Samaj at Calcutta in 1828, which was initially known as the "Brahmo Sabha." In 1814 he formed the Atmiya Sabha and carried on a persistent struggle against the religious social problems, which were widely prevalent among the Hindus in Bengal. He therefore, opposed the worship of idols, the rigidity of caste, and the prevalence of meaningless religious rituals and condemned the priestly class for encouraging these practices. His services to the cause of the abolition of suttee are well-known. By citing the authority of Upanishads he showed that the Hindu religion at its best was opposed to the practice but more than that he appealed to the reason and humanity and compassion of the people. He visited the burning ghats at Calcutta to try to persuade the relatives of widows to give up their plan of self-immolation. He organised groups of like-minded people to keep a strict check on such performances and to prevent any attempt to force the widows to become sati. Finally, Sati was abolished by the government in 1829. ...read more.

It is knowing God in a special way. The awareness and conviction that fire exists in wood is jnana, knowledge. But to cook rice on that fire, eat the rice, and get nourishment from it is vijnana. To know by one's inner experience that God exists is jnana. But to talk to Him, to enjoy Him as Child, as Friend, as Master, as Beloved, is Vijnana. The realization that God alone has become the Universe and all living beings is vijnana" Vivekenanada was another interesting refomer since he did not believe in God with forms nor in images and temples. He never had faith in any particular scripture but promoted Shankara. He did not accept Prophets or Incarnations. With his intellectual approach, he challenged many of the known leaders of religions of his time. It was Swami Vivekananda, who introduced Vedanta to the West. He was the most applauded religious leader of the Parliament of Religions held at Chicago in 1893. He established Ramakrishna Mission to spread the message of his Master. "Do this either by work, or worship or psychic control, or philosophy- by one, or more, or all of these- and be free"." This is the whole of religion. Doctrines, or dogmas, or rituals, or books, or temples, or forms, are but secondary details". Therefore Vivekenamda rejected many of his own traditions but did not absorb any of the external influences either such as Islamic and Christian traditions. ...read more.