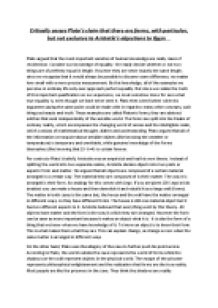 Critically assess Platos claim that there are forms, with particular, but not exclusive to Aristotles objections to them.

Transfer-Encoding: chunked ﻿Critically assess Plato?s claim that there are forms, with particular, but not exclusive to Aristotle?s objections to them? Plato argued that the most important varieties of human knowledge are really cases of recollection. Consider our knowledge of equality. We easily decide whether or not two things are of perfectly equal in length. However they are never exactly the same length, since we recognize that it would always be possible to discover some difference, no matter how small with a more precise measurement. By this knowledge, all of the examples we perceive in ordinary life only ever approach perfect equality. But since we realize the truth of this important qualification on our experience, we must somehow know for sure what true equality is, even though we have never seen it. Plato then went further with this argument saying the same point could be made with in regard to many other concepts, such things as beauty and truth. These examples are called Platonic forms; they are abstract entities that exist independently of the sensible world. ...read more.

All objects have matter and the form is the way in which they are arranged. However the form can be seen as more important because it makes an object what it is. It is also the form of a thing that we know when we have knowledge of it. To know an object is to know their form. This is what makes them what they are. This can explain change, as change occurs when the same matter is arranged in different ways. On the other hand, Plato uses the allegory of the cave to further push his point across. According to Plato, the world outside the cave represents the world of forms while the shadows on the wall represent objects in the physical world. The escape of the prisoner represents philosophical enlightenment and the realization that forms are the true reality. Most people are like the prisoners in the cave. They think the shadows are reality. Philosophers, though, are like the man who escapes the cave and sees the real world. They have true knowledge. ...read more.

Blue jeans and the sky resemble each other as they are copies of the form of blue. But this resemblance between the blue object and the form of blueness must also be explained in terms of another form. However, what form does a blue object and the form of blueness both copy to cause their similarity. This leads to infinite regression. Another form will always be need beyond the one that was proposed, so the theory of the forms cannot explain the similarity of objects. Further difficulties drawn out of the form involve ideals, for example what is an ideal animal? Is there an ideal of every different type of animal or just one general ideal? Can there be ideals of bad things such as an ideal b**b or an ideal disease. Overall, Plato?s claims that there are forms are backed up by evidences from the allegory of the cave and the divided line. However, to me, Aristotle?s theory of Corpuscularianism and how all form is shaped of matter which can be shaped in many different ways seems more assailable; also Plato himself recognized many chinks in his own armor with the third man argument, leading to the weakening of his original ideology. ...read more.