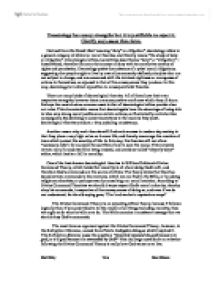 Deontology has many strengths but it is justifiable to reject it. Clarify and assess this claim.

Deontology has many strengths but it is justifiable to reject it. Clarify and assess this claim. Derived from the Greek 'deon' meaning "duty" or obligation", deontology refers to a general category of ethical or moral theories, and literally means "the study of duty or obligation". Deontological ethics, (sometimes described as "duty" or "obligation" -based ethics), therefore focus on the concept of duty with its correlative notions of rights and permission. Deontology posits the existence of a priori moral obligations, suggesting that people ought to live by a set of permanently defined principles that are not subject to change, and are concerned with the intrinsic rightness or wrongness of actions in themselves, as opposed to that of the consequences they produce. In this way, deontology is in direct opposition to consequentialist theories. There are many kinds of deontological theories. All of them have their own respective strengths; however there are some positive attributes which they all share. Perhaps the most obvious common asset is that all deontological ethics provide clear cut rules. This characteristic means that deontologists have the advantage of being able to take very strong moral positions on certain actions, as illustrated by anti-abortion campaigners. By declining to accept exceptions to the maxims they posit, deontological theories produce a very appealing consistency. Another reason why such theories still find such success in modern day society is that they place a very high value on human life, and thereby encourage the creation of laws which protect the sanctity of life. ...read more.

Mill criticised Kant for avoiding saying what the Imperative essentially reduced to - that the ends justify the means, a primary tenet of conseqentialism. It is also argued that Kantian Ethics are unworkable in modern society because Kant's refusal to allow exceptions to a maxim is not continuous with modern politics. For example, in war, the sacrifice of the few for the many is sometimes seen as necessary, however Kantian ethics would not condone this. A morality in which results are left out of account seems detached from reality and ultimately impractical. Another high profile deontological theory is Natural Moral Law, put forward by Aristotle but championed by St. Thomas Aquinas in the 13th century, and is based around the idea that what is 'natural' is good. According to Bishop Robert McManus from Massachusetts, "The recognition of Natural Moral Law provides the common ground between believers and non-believers about the fundamental moral issues affecting the common good and our living together." This is perhaps the greatest strength of this theory, and the reason that it has stood the test of time as well as it has; both theists and atheists can easily agree on the basic principles it promotes, i.e. education, preservation of life etc. However, it has been argued that deontological ethics actually contest the opinions of Jesus Christ. In the New Testament, Jesus opposed legalistic morality in the New Testament, and debated sharply with the moral legalists of his time, the Pharisees. ...read more.

Ultimately it is argued that deontological theories do not provide an accurate account of human motivation. Although deontological ethics have many redeeming features, they are often seen as impractical by many for several reasons. In contrast to the opinion that the clear cut rules deontology offers enables people to make easier decisions, the inherent inflexibility of this characteristic is frequently claimed to be a shortcoming. It is seen to cause problems in that it does not respond to changes in ethical evaluations through time, and cannot take into account special circumstances. We have to ask the question: How much of deontological ethics is culture bound? In other words, in what ways have they been influenced by the subjective opinions of those who formulated them? Some people maintain that it is impossible to defend the view that there exists an objective moral law as issues such as euthanasia and homosexuality are accepted in some cultures and rejected completely in others. Seeing as most deontological ethics base themselves around this idea, the challenge damages their standing as workable ethics. Jeremy Bentham, an early Utilitarian philosopher, criticised deontology on the grounds that it was essentially a dressed-up version of popular morality, and that the unchanging principles that deontologists attribute to a universal law or reason are really a matter of subjective opinion. It seems as though no deontological theory is without fault, and although they all have attractive features, their criticisms always seem to render them unworkable in modern day society, and therefore it is justifiable to reject deontology. ...read more.