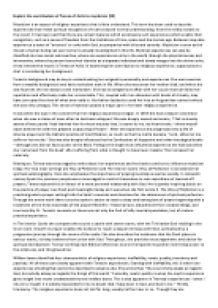 Explain the contribution of Teresa of Avila to mysticism

Transfer-Encoding: chunked ﻿Explain the contribution of Teresa of Avila to mysticism (35) Mysticism is an aspect of religious experience that is little understood. This term has been used to describe experiences that reveal spiritual recognition of truths beyond normal understanding, from the mildly ecstatic to the occult. It has been said that there are certain features which accompany such experiences which enable their recognition, such as a sense of freedom from the limitations of time, space and the human ego. Believers may also experience a sense of ?oneness? or unity with God, accompanied with bliss and serenity. Mysticism is seen as the closest a human being can ever come to actually meeting God in this life. Mystical experiences can also be classified into two areas: extrovertive, where one experiences unity in the world through the physical senses and introvertive, where the person loses their identity as a separate individual and slowly merges into the divine unity. ...read more.

Perhaps the single most influential experience she had was when she ?came back from the dead? after suffering from what is thought to have been malaria. This increased her notoriety. Moving on, Teresa was encouraged to write about her experiences and her books continue to influence mysticism today. Her two main writings are Way of Perfection and The Interior Castle. Way of Perfection is considered her spiritual autobiography. Here she emphasises the importance of praying mentally as well as vocally. In sixteenth century Spain the common people were encouraged to restrict themselves to vain repetitions of learned-off prayers, Teresa rejected this in favour of a more personal relationship with God. Her superbly inspiring classic on the practice of prayer is as fresh and meaningful today as it was when she first wrote it. The Way of Perfection is a practical guide to prayer setting forth the Saint's counsels and directives for the attainment of spiritual perfection. ...read more.

Though they are remembered, they are imperfectly recalled, but recognised if they reoccur ? the recipient usually feels a profound sense of the importance of the experience. Associated with Teresa?s raptures are always visions. Her most famous vision involved her seeing a small angel with a beautiful face holding ?a long golden spear? tipped with a ?little fire? which he thrust into her heart. Finally, there is passivity, when the mystic feels as if they have been taken over by a superior power. In Teresa?s case, her visions were sometimes accompanied by levitation or strange screams. It could be this aspect that led many to believe she was possessed by the devil. In terms of impact, Teresa of Avila had a profound influence on religious experience. She the first female saint of the Roman Catholic Church ? the saint of headache sufferers, rather oddly. She was somewhat of a reformer, emphasising a personal relationship with God above rigid sacramentalism. In 1562 she established the strict Carmelite order in various areas of Spain and her writings continue to be studied by believers today. ...read more.