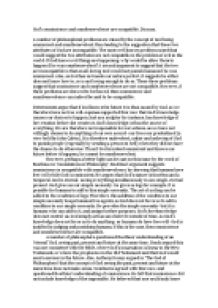 ﻿God?s omniscience and omnibenevolence are compatible. Discuss. A number of philosophical problems are raised by the concept of God being omniscient and omnibenevolent, thus leading to the suggestion that these two attributes of God are incompatible. The most well known problem raised that would suggest the two attributes are not compatible is the problem of evil in the world. If God knows evil things are happening- why would he allow them to happen if he was omnibenevolent? A second argument to suggest that the two are incompatible is that an all-loving God would not punish humans if he was omniscient. Also, as God has not made our nature perfect, it suggests he either does not know how to, or is not loving enough to do so. These three problems suggest that omniscience and omnibenevolence are not compatible. However, if these problems are showed to be flawed, then omniscience and omnibenevolence can indeed be said to be compatible. Determinists argue that if God knows the future it is thus caused by God, so we therefore have no free will. Aquinas supported this view that God?s knowledge causes our choices to happen. Just as a sculptor for instance, has knowledge of her creation before she creates it, God?s knowledge is thus the source of everything. ...read more.

However, this criticism has no solid evidence for it. One cannot assume God can do things we consider to be impossible when we have seen no signs of such occurrences happening in our universe- especially as the argument holds that God is everlasting and thus immanent. Thus it seems fair to conclude that there are two solutions to this philosophical problem that effectively show that omniscience and omnibenevolence are compatible. If a person considers God?s nature to be ?eternal?, then Boethius? argument preserves God?s omniscience while allowing for freewill. If a person considers God?s nature to be ?everlasting?, then Swinburne?s argument does likewise. An argument to suggest that omnibenevolence and omniscience are incompatible can be taken from the work of Descartes in his fourth meditation from ?Meditations on First Philosophy?. As God is perfect, he would not want to deceive us. If God creates us, he is also responsible for our knowledge and judgement. If God does not want to deceive us, this judgement he gives us must be infallible. However, humans constantly make mistakes. Thus, either God is not omniscient so is not able to likewise give humans perfect judgement as he may not have it himself, or God is omniscient, but is not omnibenevolent because he has not granted us with the perfect judgement he possesses. ...read more.

Many philosophers have contemplated this issue. However, I feel the most convincing response to this has been mentioned above- free will. Originally formulated by Iranaeus in his theodicy, he effectively argues that it is most loving to allow humans free will by remaining at an epistemic distance from the Earth, by not interfering with it. Evil is necessary for humans to reject and thus be able to do good. It is also necessary for humans to be able to willingly choose to follow God or not. If God intervened and prevented evil, everyone would be aware of God?s existence, so their free will would be limited, which is not all loving. Thus, God can be omnibenevolent while being omniscient. It seems clear to conclude that God?s omniscience and omnibenevolence are compatible. Every argument put forward to suggest the attributes were incompatible was effectively destroyed, and turned around to show that therefore the two attributes are compatible. Boethius and Swinburne put forward convincing arguments to show that God can be omniscient while humans have free will, thus meaning he is justified in judging us- preserving his omnibenevolence. Descartes and Hegel effectively showed that God can be omniscient and omnibenevolent, despite not giving us perfect judgement. Iranaeus? point about free will also nullifies the problem of evil, showing that omnibenevolence and omniscience are compatible attributes. I therefore agree with the statement. ...read more.