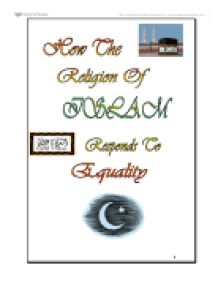 How Islam responds to issues about Equality

Contents Pages 1. Introduction 3 2. r****m 4 3. Sexism 5 4. Attitudes towards other religions 6 5. Forgiveness/Reconciliation 7 6. Conclusion 10 7. Bibliography 12 Introduction Throughout this project, the intention of the information is to answer the question: How does the religion of Islam respond to issues on equality? All through this Booklet, I have kept in mind to focus on the ideas of Islamic equality and what this means to a Muslim, in the Islamic definition. In Islam a definition of equality means evenness, uniformity, impartiality, parity etc. Therefore, if applied to Islam in liaison to the now modern everyday life this would involve issues such as * r****m * Sexism * Forgiveness * Religious attitude Which are the subjects I will be talking about and looking over at the Islamic perspective on these topics of concern. To portray the view Islam has over these issues I will be using: * The genuine teachings from the word of our God `Allah` himself, doing this through the Qur'an. * Referring to important hadiths (lessons) and quotes from the prophet Mohammed (pbuh) * The message given out today by the most knowledgeable top scholars. These should give a clear message of what, the view on these issues used to be like, how they have progressed and possibly altered over the years, the differences on these matters from today in contrast to when the religion began, and how it is today, right now in Muslim houses and nations across the world. r****m Constantly throughout the world today and especially in the history of humans since the beginning of civilisation. There has a been a power struggle between those trying to gain power and have authority over others whether it is because of their skin colour, lineage, education, origin or physical disabilities. Islam has extinguished the discrimination which subsisted in the land of Arabia, the roots of the religion and the main reason it was created was to give equality among men and women of all races. ...read more.

Also to try and avoid any kind of conflict between Islam and those who follower other faiths, Allah did send down a message to Mohammed, clearly showing there is no wilful approach to any other religion for trouble or arguments. `Follow your path, let me follow mine and there shall be no conflict between us` Islam does not bring out clashes with other religions but only wishes for there to be peace. From the above quote it clearly states, the Muslim intention not to have any fight/conflict with those of any other religion. However should any Muslim be attacked by one of another religion they are permitted to fight back and to stand up for themselves as long as they are in the right. Forgiveness/Reconciliation Allah has granted human beings with intelligence, this intelligence demands responsibility. Therefore, the more intelligent a person is the more he/she is responsible. When the intelligence is missing, the responsibility is neither there. This also means that little children are not held responsible for their actions or words, because their intelligence has not developed. The insane are not responsible, because they have lost the rational capacity. However, part of us being Human, is also that we make mistakes, nobody's perfect. Sometimes we make mistakes without thought and intention. But sometime we knowingly and deliberately commit sins and do wrong to others. It is said that `To err is human and to forgive is divine`. Both parts of this statement are very true. As human beings we are responsible, but we do also make mistakes and we are constantly in need of forgiveness. Two Types of forgiveness: * Forgiveness from Allah * Forgiveness from other people Both are important as we do wrong to both our God and towards other people. Allah's Forgiveness Allah is the most forgiving, of all. There is a hadith recited by the prophet that talks about the mercy of Allah. ...read more.

If you look along each row, one can see a diversity of people all kneeling down together sitting on the floor, the rich and poor, the knowledgeable and the unknowledgeable. There are no differences among these people as they are all the same in the sight of Allah, their direction during prayer, as well s their holy book, as their Lord is one and also their movements during the prayer follow one imam. Especially in Mecca and Medina, when hajj or umrah is performed, equality there is at its highest, everyone side by side all wearing the same clothes all bowing to the same God, only thing differing among them is the strength of their belief and the good they have done. An example of such was when some of the companions talked to Osama Bin Zaid, the favourite of Prophet Muhammad, to intervene for the sake of the well reputed woman from the Quraish tribe who deserved punishment for stealing (that is having her hand cut) Osama talked to the prophet, the prophet got angry and said: ` Those before you were districted, that is because the renowned is untouched when he steals, and the poor is punished, verily if Fatima (daughter of Muhammed) stole, I would have her hand cut. ` Islam is emphasizing the equality and applying it into the society since 1400 years ago, when during that time mankind used to suffer the worst distinction among people and individuals in culture and prepared the enslaving o humans. This is where the secret to Islam's great real power, strength and past triumph lie. One is mistaken to think that Islam prevailed only because Muslims like dying in battles as others like to live, no!. Islam did not win through battles only, but because Islam is a complete unique guidance for life, unique in its rituals, beliefs, dealings and ethics and from all in all that is the religion of Allah. ...read more.