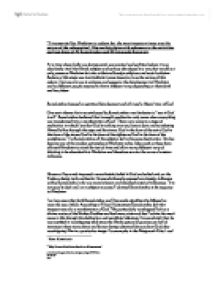 &quot;It is essential for Hinduism to reform but the most important issue was the nature of the reformation&quot; Discuss this claim with reference to the activities and teachings of A) Ramakrishna and B) Daynanda Sarasvati.

"It is essential for Hinduism to reform but the most important issue was the nature of the reformation" Discuss this claim with reference to the activities and teachings of A) Ramakrishna and B) Daynanda Sarasvati At a time where India was facing social, economical and political reform it was absolutely vital that Hindu religion and culture developed in a way that would not only preserve Hinduism but also withstand foreign religious and social criticism. Reform at this stage was inevitable but more important was the nature of this reform. The key aim was to enhance and preserve the development of Hinduism and so different people reacted to this in different ways depending on their faith and key ideas. Ramakrishna focused on spiritual development and allowed a liberal view of God. One main theme that was reinforced by Ramakrishna was his desire to "see in God in all". Ramakrishna believed that true self-realisation only came when everything was transformed into a manifestation of God. "I have now come to a stage of realization in which I see that God is walking in every human form and manifesting Himself alike through the sage and the sinner. ...read more.

Ramakrishna believed that if a Hindu developed his mystical side and practised bhakti worshipped. This would lead to the natural eliminatation of the caste system and ones ego since everything was a manifestation of God and class struggle no longer exists. "Lovers of god have no caste" On the other hand, Daynanda did not want to abandon the caste system altogether but felt that it needed to be re defined. This means that those with Knowledge and good works should be the true Brahmins. In contrast the nature of Ramakrishna reform was based on mystical experience whereas Daynanda bases caste on peoples actions rather than belief. A key difference between the nature of reformation of Ramakrishna and Daynanda was their attitude on acquiring knowledge. For Ramakrishna knowledge was secondary to loving God. Maya conceals knowledge from man. It is through ignorance man forgets God and fails to achieve union with God. 4Ramakrishna specifically states that woman and gold are the main distraction from gold.. The Bhagavad gita gives its own verdict on this subject, "The self is the enemy of the self and the self is also the friend of the self". ...read more.

It is only the self-respecting man who knows how to respect others" The core of these teachings was that India can only foster true nationalism when it self realisation is cultivated. In conclusion the nature of reformation differed between Ramakrishna and Daynanda depending on how they viewed Hinduism. For Ramakrishna, the nature of reform needed to be directed towards the re discovery of the self. Whereas for Daynanada, the nature of reform concerned social and political reform in order to preserve the real Hinduism. Therefore it can be seen that the nature of Ramakrishna's reform was a much more tolerant, plural and liberal one. However it did nit contain all the elements for a reformation that preserved Hinduism. Daynanda's nature of reformation directed Hindu to the original truth and stripped off all the extra features that were restricting the progress of Hinduism. He advocated the education of women, belief in one God and re defining of the caste system. This was all very appropriate since he thought that religion has much more to offer than just a system to channel religious beliefs. This shows that the nature of the reform was very important since reform itself was inevitable anyway. 1 Klaus Klosterimeir 2 http://www.hinduism.fsnet.co.uk/namoma/ 3 Gyln Richards. A source book of Hinduism 4 Glyn Richards. A source book of Modern Hindusim n:\mywork\rs\hinduism\nature of reofmr.doc 02/05/07 97aftab ...read more.