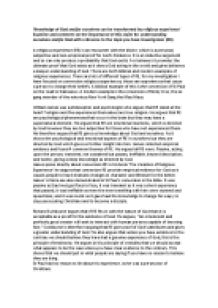 Knowledge of God and/or ourselves can be transformed by religious experience Examine and comment on the importance of this claim for understanding ourselves and/or God with reference to the topic you have investigated.

Transfer-Encoding: chunked ﻿?Knowledge of God and/or ourselves can be transformed by religious experience? Examine and comment on the importance of this claim for understanding ourselves and/or God with reference to the topic you have investigated. (50) A religious experience (RE) is an encounter with the divine, which is a personal, subjective and non-empirical proof for God?s Existence. It is an inductive argument and so can only produce a probability that God exists. For believers it provides the ultimate proof that God exists as it shows God acting in the world and gives believers a deeper understanding of God. There are both biblical and modern examples of religious experiences. There are lots of different types of RE, for my investigation I have focused on conversion religious experiences, these are experiences that cause a person to change their beliefs. A biblical example of this is the conversion of St Paul on the road to Damascus. A modern example is the conversion of Nicky Cruz, the ex gang member of the notorious New York Gang the Mau Maus. William James was a philosopher and psychologist who argues that RE stand at the heart f religion and the experiences themselves are true religion. He argues that RE are psychological phenomena that occur in the brain but they may have a supernatural element. ...read more.

There are also scholars who argue against RE and who argue that RE are not genuine and cannot be used as proof for god?s existence, neither can it give us any further knowledge of him. However, It can give us further knowledge of ourselves. There are four key challenges to RE. The first challenge to RE is the psychological explanation; the idea that RE can be explained by psychology. Feuerbach argued that God is not real only a human projection made of our own aspirations and desires. Freud argues that God is a neurosis caused by insecurity and our desire for a father figure to protect us. Both of these arguments against RE argue that RE give us a greater insight into our own minds. Dawkins argued in his book the God Delusion that Re are just expressions of a persons psychological needs. He provided alternative explanations for RE, he used the famous example of the devil bird. He argued that RE are harmful and show how dangerous it is when people become deluded. He argued it was ridiculous to base ones life on freak misunderstandings. Another explanation is what may be interpreted, as a Re may actually be a mental illness, like schizophrenia, bipolar or epilepsy. St Paul experienced flashes of light in his RE and then backed out. ...read more.

Nicki Cruz was converted from a life of crime to Christianity, after his conversion he set up charities and changed his life for the better. Nicki Cruz is the director of teen challenge a charity supporting troubled youth. He has set up Nicki Cruz Ministries and travels the US as an evangelist. His conversion gave him the power to forgive his mother and father for abusing him as a child. He went on to convert them and his brother from satanic worship to Christianity. This shows how RE enriches and helps people to become better people. Therefore RE can give us further knowledge into God and ourselves. However RE is an inductive argument so it can only produce probabilities not certainties. It is difficult to say if these experiences are real as they are personal and subjective. They cannot give us any further knowledge into God only into ourselves. Personally I agree with Peter Donovan in his book ?Interpreting Religious Experience? that there are good arguments for and against RE. I believe that the different types of RE and their personal and subjective nature mean that they do not give a deeper knowledge of God. However I believe that the do have a powerful influence on peoples lives and so are the most powerful form of religion. However, I believe that as every persons individuality lead to the personal nature of RE. I believe this means that RE can give us a deeper understanding and knowledge of ourselves. ...read more.