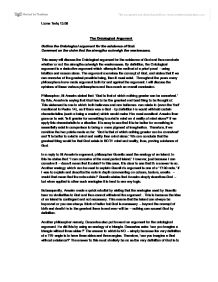 Outline the Ontological argument for the existence of God. Comment on the claim that the strengths outweigh the weaknesses.

The Ontological Argument Outline the Ontological argument for the existence of God. Comment on the claim that the strengths outweigh the weaknesses. This essay will discuss the Ontological argument for the existence of God and thus conclude whether or not the strengths outweigh the weaknesses. By definition, the Ontological argument is a deductive argument which attempts the method of a priori proof - using intuition and reason alone. The argument examines the concept of God, and states that if we can conceive of the greatest possible being, then it must exist. Throughout the years many philosophers have made argument both for and against the argument. I will discuss the opinions of these various philosophers and thus reach an overall conclusion. Philosopher, St Anselm stated that: 'God is that of which nothing greater can be conceived.' By this, Anselm is saying that God has to be the greatest and best thing to be thought of. This statement is one in which both believers and non believers can relate to (even the 'fool' mentioned in Psalm 14), as if there was a God - by definition He would withhold certain characteristics (such a being a creator) which would make Him most excellent. ...read more.

We can use this to test the statement: 'God's existence is necessary.' Firstly, we question whether or not this statement could maybe be true - However, if God's existence is necessary then how can a necessity become a possibility/maybe true? - Calling this statement as 'maybe true' is only illogical. We then question whether the statement can be 'no' but, a statement is only ever 'no' if it contains contradiction, for example, 'no one in the world should lie except me.' If no one should lie - neither should I as I am a part of the world, this thus makes the statement incorrect. However the statement: 'God's existence is necessary,' contains no contradictions so 'no' has been ruled out. Therefore we are left with 'yes' and so Malcolm states that God must exist. The final argument for the ontological argument comes from philosopher Platinga, who devised a modal form. He states that firstly, it is proposed that a being has maximal excellence in a given possible world - if and only if it is omnipotent, omniscient and wholly good in that world. ...read more.

Furthermore, in response to Malcolm's argument of 'yes, no or maybe' statements philosopher, Davies goes on to suggest that the use of the word 'is' has been used innocently. This is because 'is 'can only be used in two ways. Firstly, to define something, for example: there IS the Queen and secondly, to explain the existence of something for example, there is a thing as a vampire. Malcolm assumes that: 'GOD is necessary, therefore God is.' However, Davies disagrees as he believes the word 'is' has not been used to describe or explain anything - therefore it has been used incorrectly and therefore does not withstand logic and reason. In conclusion, It is apparent that there are far more weaknesses than strengths. I believe that the above stated strengths are extremely weak. For example, Norman Malcolm's argument is purely based on play on words. Therefore it is easy to conclude that the argument may strengthen the faith of a believer, however, it will fail convince an atheist. The main reason for this being that there are far more weakness to strengths - the few strengths that have been portrayed are also extremely weak. ?? ?? ?? ?? Uzma Tariq 13.06 ...read more.