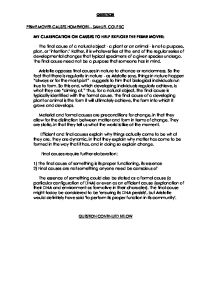 PLATO AND THE FORMS

MY CLARIFICATION ON CAUSES TO HELP EXPLORE THE PRIME MOVER:

The final cause of a natural object - a plant or an animal - is not a purpose, plan, or ‘intention.’ Rather, it is whatever lies at the end of the regular series of developmental changes that typical specimens of a given species undergo. The final cause need not be a purpose that someone has in mind.

Aristotle opposes final causes in nature to chance or randomness. So the fact that there is regularity in nature - as Aristotle says, things in nature happen “always or for the most part” - suggests to him that biological individuals run true to form. So this end, which developing individuals regularly achieve, is what they are “aiming at.” Thus, for a natural object, the final cause is typically identified with the formal cause. The final cause of a developing plant or animal is the form it will ultimately achieve, the form into which it grows and develops.

Material and formal causes are preconditions for change, in that they allow for the distinction between matter and form in terms of change. They are static, in that they tell us what the world is like at the moment.

Efficient and final causes explain why things actually come to be what they are. They are dynamic, in that they explain why matter has come to be formed in the way that it has, and in doing so explain change.

1) The final cause of something is its proper functioning, its essence
2) Final causes are not something anyone need be conscious of

The essence of something could also be stated as a formal cause (a particular configuration of DNA) or even as an efficient cause (explanation of their DNA and environment as formative in their character). The final cause might today be considered to be 'ensuring its DNA persists', but Aristotle would definitely have said 'to perform its proper function in its community'.

Aristotle believed that all movement depends on there being a mover. For Aristotle, movement meant more than something travelling from A to B. Movement also included change, growth, melting, cooling, etc. He argued that behind every movement there must be a chain of events that brought about the movement that we observe taking place. He argued that this chain of events must lead back to something which moves but is itself unmoved.Also,in Aristotle’s view, change is eternal. There cannot have been a first change, because something would have to have happened just before that change which set it off, and this itself would have been a change, and so on. Aristotle calls this source of all movement the Prime Mover. The Prime Mover to Aristotle is the first of all substances, the necessary first sources of movement which is itself unmoved. It is a being with everlasting life, and in metaphysics Aristotle also refers to this as ‘God’.

The Prime Mover causes the movement of other things, not as an efficient cause, but as a final cause. In other words, it does not start off the movement by giving it some kind of push, but it is the purpose, or end of the movement. This is important for Aristotle, because he thought that an effective cause(giving a push), would be affected itself by the act of pushing. Aristotle believed the prime mover causes things to move by attraction in much the same way that a pretty flower attracts a bee. The flower attracts the bee but cannot be said to be changed in the process.

Aristotle said that the Prime Mover had to be immaterial. It could not be made of any kind of stuff, because matter is capable of being acted upon, it has the potential to change. Since it is immaterial, it cannot perform any kind of physical action. Therefore, Aristotle thought, the activity of the Prime Mover, God, must be purely spiritual and intellectual and the activity of God is thought. He continues, ‘God is a thought of a thought’ . At the end of this line of argument, Aristotle comes to the conclusion that God knows only himself; so he does not know this physical world where we live and act. He does not have a plan for we inhabitants, neither is he affected by our actions.

My Interpretation Of Plato’s cave

In a nutshell Plato’s cave is a method in which Plato illustrates his ideas of forms.

- They do not know what it is outside the cave, nor can they see the entrance of the cave

- As far as they concerned this life is normal

- Shapes appear and disappear in forms of Shadows

-These shapes are given names by the prisoners, ‘house’ ‘tree’ etc

-There is a Roadway,but we do not know where this leads

-Unseen by the prisoners, life sized 2-dimesional cut –outs are constantly being carried along this roadway

-Due to the Fire,shadows of these cut-outs are projected on to a far wall of the cave.

-These shadows are solely what the prisoners have seen and know

-He realises that the shadows he once knew and understood, were simply projections of 2-d cut-outs

-When the escapee returns to tell news of his discovery of true reality, he is not believed and is killed

I believe the cave to be the world in which the prisoners live. As far as they are concerned their situation is normal. The cave is their life. However these prisoners are unable to turn their heads,therefore the cave in which they ‘Know’ is merely only a segment of what they can see.

No one knows where it leads to. However what is known is that,2-D cut-outs are carried along this road.These cut-outs are generate the shadows wrongly named by prisoners as:House..tree...girl..etc

Plato’s point is that the prisoners are mistaken. They take the terms in their language to refer to the shadows that pass before their eyes, rather than (as is correct, in Plato’s view) to the real things that cast the shadows. These shadows are the prisoner’s understanding  as reality.

The prisoners do not know this exists. It is the fire that is the true source of the prisoner’s ‘Knowledge’. Without the fire’s light, total darkness would consume the cave. The prisoner’s lives would consist of silence. Nothing would be seen, nor said.

The immigrant uses this pathway to seek true reality. At first instance this light blinds the prisoner. He is able to get up and walk about (a process which takes some time, as he has never done it before). Eventually he will be compelled to explore; he walks up and out of the cave, where  he is instantly blinded by the sun. He turns to the shadows on the floor, in the lakes, slowly working his way out of his clouded mind, and he is eventually able to glimpse the sun. This glimpse signifies a different type of reality that the prisoner had never experienced before.