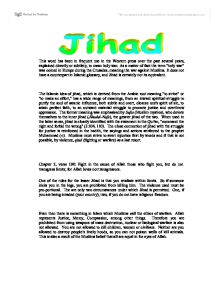 The Islamic idea of jihad

This word has been in frequent use in the Western press over the past several years, explained directly or subtlety, to mean holy war. As a matter of fact the term "holy war" was coined in Europe during the Crusades, meaning the war against Muslims. It does not have a counterpart in Islamic glossary, and Jihad is certainly not its equivalent. The Islamic idea of jihad, which is derived from the Arabic root meaning "to strive" or "to make an effort," has a wide range of meanings, from an inward spiritual struggle to purify the soul of satanic influence, both subtle and overt, cleanse one's spirit of sin, to attain perfect faith, to an outward material struggle to promote justice and overthrow oppression. ...read more.

as a last resort. Chapter 2, verse 190: Fight in the cause of Allah those who fight you, but do not transgress limits; for Allah loves not transgressors. One of the rules for the lesser Jihad is that you retaliate within limits. So if someone kicks you in the legs, you are prohibited from killing him. The violence used must be pro-portional. The are only two circumstances under which Jihad is permitted. One, if you are being invaded (your country), two, if you do not have religious freedom. Even then there is something in Islam which Muslims call the ethics of warfare. Allah represents Justice, Mercy, Compassion, among other things. Therefore you are prohibited from using weapons of mass destruction, nuclear or biological warfare is also not allowed. ...read more.

The point of Jihad is to achieve a Ummah, perfect society in the end. It was and is in some cases said that Islam is a violent Religion and lives by the sword. This was how Islam was portrayed in a video, called "Sword of Islam". The concept of Jihad was wrapped into simple blood lust savagery. This is far from the truth. The Muslim greeting is, Assalaamu 'alaikum (peace be upon you). Islam is peaceful in nature. Muslims are strictly prohibited to convert people by the Sword. This is what the Qur'an says: Chapter 2, verse 256: Let there be no compulsion in religion: Truth stands out clear from Error: whoever rejects evil and believes in Allah hath grasped the most trustworthy handhold, that never breaks. And Allah heareth and knoweth all things. By Naveed Aziz 4R ...read more.