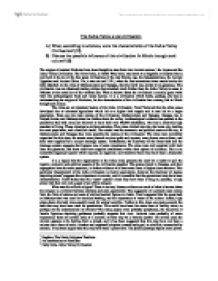 What, according to scholars, were the characteristics of the Indus Valley Civilisation? Discuss the possible influence of this civilisation In Hindu thought and culture

The Indus Valley a lost civilisation A) What, according to scholars, were the characteristics of the Indus Valley Civilisation? (12) B) Discuss the possible influence of this civilisation In Hindu thought and culture? (8) The origins of modern Hinduism have been thought to stem from two Ancient sources1, the Aryans and the Indus Valley Civilisation. The River Indus, in North West India, was home to a forgotten civilisation that is now held to be one of the four great civilisations of the late Bronze Age, the Mesopotamians, the Ancient Egyptians and Ancient China. Yet, it was not until 1921, when the first excavations were carried out by Sir John Marshall on the cities of Mohenjo-daro and Harappa, that the world was alerted to its greatness. This civilisation was an urbanised trading culture that extended much further than the Indus Valley to areas in Pakistan to the coast line of the Arabian Sea. What is known about the civilisation is mainly guess work from the archaeological finds and Aryan hymns. It is a civilisation which holds, perhaps, the key to understanding the origins of Hinduism, for the characteristics of the civilisation has a strong link to Hindu thought and culture. The cities are an important feature of the Indus Civilisation. Flood 2believed that the urban areas developed due to increased agriculture which led to a higher food supply and in turn led to a larger population. There are two main centres of the civilisation, Mohenjo-daro and Harappa. ...read more.

After 1500BCE this language may have been influenced by the Aryans. It was around 1500BCE that that Indus Valley civilisation began to demise. The actual reason for this is unknown; however there are numerous theories. It is generally thought the sudden demise of the Indus Valley civilisation was the result of an invasion by the Aryans, indeed a number of skeletons were found in Mohenjo-daro, laying where they had fallen as the result of a violent death4. Hopkins has suggested that the Aryans may have been partly responsible via a series of pitched battles. However, Arthur Cotterell5 suggests that the main cause of decline was internal. Evidence in Mohenjo-daro seems to support this argument: after 1900BCE the civilisation began to decay the houses were less meticulously planned out and poorly built, there was a deterioration of the surrounding landscape possibly due to overgrazing. Mohenjo-daro was suffering from a series of high floods, so the government's concerns were probably turned to handling this problem rather than the organization of infrastructure. The other cities probably broke away from Mohenjo-daro to form their own regional cultures. This combined with the Aryan raids may have been enough to bring about the end of the civilisation. Indeed, Cotterell argues that the Aryans may have destroyed dams which may have resulted in the high floods and the lack of irrigation for the farmers. Aryan hymns tell the story of the god Indra rolling stones (the composition of the d*m) like wagon wheels, and giving the Aryans victory over people living in strong holds, walled towns and fortified cities. ...read more.

The great bath at Mohenjo-daro and the drainage system suggests the Indus Valley people saw cleanliness and hygiene is important. This was probably mainly a practical reason for the successful sustainment of a city, but there could have been religious reason which has filtered into modern Hinduism. The great bath may have been occupied by the priests and the general public. Around the great bath there are a further eight bathrooms, these more secluded rooms may have been used by the priests, while the general public used the great bath.6 Indeed the great bath has been suggested to be a brothel. However, the great bath does seem to prefigure the holy bathing places of Hinduism. In conclusion, the Indus Valley religion does seem to have similarities to modern Hinduism. However, it must be remembered that scholars who seeks links between the Indus Valley and modern Hinduism may be blinded by their search to the facts that suggest otherwise. Throughout humanity there are key features in religion that are universally applied, they all depend on the circumstances of the human and any similarities or link may be the result of coincidence rather than a direct link. However, it is entirely possibly that there may have been a cultural synthesis between the Aryans and the Indus, through interbreeding, which allows ideas to continue and possibly leak into the Vedas. But this is speculation and will probably not be confirmed until the decipherment of the hieroglyphs until then it depends on the perception of the scholar. 1 Hopkins, The Hindu Religious Tradition 2 An Introduction to Hinduism 3 Early India- Indus Valley Civilisation 4 Flood 5 Ancient Civilisations 6 Cotterell ...read more.