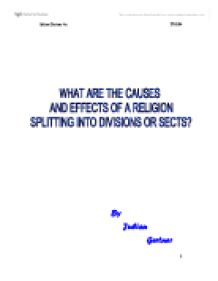 What Are the Causes and Effects of a Religion Splitting Into Divisions or Sects?

They suggested that if Jews were granted equal opportunities, they could become good citizens. The Jews grew sick and tired of the persecutions they were suffering and the various oppressions they were under. Their history caused them to aspire to make Jewish life resemble that of the non-Jewish world. These people were known as the Maskilim and belonged to the Haskalah movement. They began to learn the vernacular language in this case German and studied secular subjects such as maths and philosophy. They consequently detached themselves from their Jewish roots. The Maskilim set out various targets in order to achieve their ultimate goal of emancipation. They attempted to alter the lifestyles of all Jews and began by integrating themselves subtly into their gentile society. This modern reforming way of thinking allowed the changing lifestyle and adjustments made to bring about acceptance into German society. This reforming tendency became popular amongst many German Jews as they strived for emancipation, stimulating the introduction of this Reform movement. The religious issue of 'expansion' is another contributing factor to the rapid growth of the Reform movement. People fell in love with this new idea of adjusting their religious practises and beliefs to suit their own lifestyle. This provided them with freedom and the Jews no longer felt restricted in their lifestyle. They developed a fundamental belief that G-d didn't personally give the Torah to the Jewish people on Mount Sinai, rather the laws were simply inspired by Him. This provides the Jews with the freedom to change or adjust the laws, as they believe the laws were not intended to be taken literally; they are not the actual words of G-d. The Torah is therefore to be taken as guidelines and suggestions as to how to lead a moral life and not a series of compulsory obligations. Many Jews were attracted to this idea that one could change their religious practises in order to suit their own lifestyle. ...read more.

Therefore, if they believe in their own interpretations, then trying to unify and compromise their beliefs would be sinning according to what they believe in. For example, if a Reform Jew believes he/ she can play musical instruments in the synagogue on the Sabbath and an Orthodox Jew believes he/ she cant then for an Orthodox Jew to change/compromise to playing an instrument on the Sabbath, then he/she would be sinning (according to their beliefs) and visa versa. It is interesting for people to have different customs but if everything was the same and all people believed and practised the same laws, then there would be no such thing as custom. This would be a shame because it is good to have some variety in Judaism and that's what custom does. In conclusion, the ideal would be for Judaism to be a unified race with no differences. However, if this were to be attempted at this present time, it would make things a lot worse then they already are because people would have to change their beliefs dramatically and it would end up creating more divisions then there are. Although it wouldn't be practical for this to happen, something needs to be done because throughout the world more and more divisions are being created. For example, there is a new sect in America, which is a mixture between a Conservative and Orthodox Jew, called CONSERVADOX. Soon there will be hundreds of different sects of Judaism so some kind of unity will have to occur, in order to prevent this from happening. Conclusion: In doing this project, I have learnt the origins and development of two main Jewish sects-Reform and Hasidism. I have discovered the detailed origins and developments of these two movements and how they differ by studying their beliefs, attitudes, social practises and the effects they have on their adherents. I have decided that Jews overcoming their differences and uniting is good and bad for multiple reasons, however something needs to be done in order for Judaism to remain a nation. ...read more.